Home › Medicinal plants › Properties of willow
This article was endorsed by Elisenda Carballido - Dietitian nutritionist. Postgraduate in Phytotherapy and master in Nutrition and Metabolism.

Habitat: By the side of the rivers, channels and woods of humid climate.

Perennial tree of the Willow family – salicaceae up to 25m. Erect stems, dark greyish. Young branches silky. Grey silvery leaves, serrate, till 10 cm long, covered with soft hairs on both sides. Flowers in catkins; male ones, cylindrical, yellow till 8 cm; female ones, till 6 cm, green at the beginning but becoming white when full of seeds. 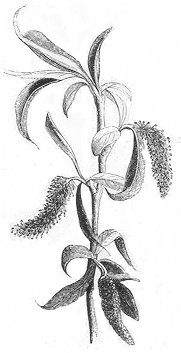 Either the bark, the leaves or the flowers will be picked up in spring. The first one should be dried in the sun and the rest in the shade. its bark should be obtained from branches a couple of years old and they can only become powdered before being used.

INTERNAL USE REMEDIES WITH WILLOW

Willows have been used and are being used like an alternative to the aspirin (acetylsalicylic acid) in fact the aspirin was extracted initially from this plant, besides the meadowsweet (Filipendula ulmaria), the gaultheria (Gaultheria sp.), poplars (Populus sp.) and some species of birches (Betula sp.) before it could be synthesized chemically in the year 1890.

Its content in salicin becomes salicylic acid in the organism inhibiting the prostaglandins and reducing the pain sensation, specially if we consider that, besides being analgesic it also presents anti inflammatory properties.

Therefore, it can be used to palliate the pain in all type of manifestations: headache, neck pain, muscular distensions and pains, muscular atrophy, fibromyalgia, sciatica, earaches, rheumatic pains, pains in the menstruation, etc.

The treatments carried out with this plant should be prolonged during some time so that they can have their effect, fsince it doesn’t act as quick as the aspirin, although it really becomes a natural treatment to the use of this product.

It has been said that it presents less contraindications than aspirin, although those that can not use aspirin should not take this plant. Any treatment should be started with very low doses to check the tolerance of the organism to this product, since the proportion of salicylic acid present in the bark of the willows depends on many climatological and seasonal factors.

The dose for the adults is stablished between the 100 and the 250 mg taken in 4 or 6 intakes a day. Children from 4 until 10 should not overcome 60 mg daily, the highest doses being used in rheumatic or muscular pains, and, mainly, with the unbearable pains of gout, arthritis or osteoarthritis

A similar treatment is used for earache, tendinitis, bursitis, backache, dislocations (Decoction of a pinch – 2 g – of dry bark per cup of water. Take two or three cups a day.)

Other uses of willow

Its wood is strong although flexible and very light. It has been used to make cricket bats, matches and carving. In the rural areas it is used for the construction of poles and to light the fire. The searchers of water use a willow branch in fork form to find the valuable liquid.

People that present allergy to the aspirin or medications with the same principle (acetylsalicylic acid) should not use this plant. Neither those that present adverse stomach reactions to its use, manifested mainly in form of gastric acidity.

In the same way, those that have antecedents of gastric ulcer, intestinal hemorrhage, hemophilia, problems of blood clotting, asthma, hepatic or renal problems and colitis.

The administration of this plant in children with illnesses of viral type, as colds or flu, can develop the syndrome of Reye, an illness that generally affects the children between 4 and 12, with serious results in the liver and in the brain, which is attributed to the use of the aspirin when they have the flu or the chicken pox.

It should not be taken in combination with other anticoagulant or antiinflammatory medications, during pregnancy or in those people that present whistlings or noises in the ears (tinnitus) or hearing loss.

Other species of willow

Similar properties are present in other species of willows, among those we could mention: