Habitat: Although its origin is unclear, it is believed that this plant comes from Anatolia (modern Turkey) and was introduced into Europe by the Romans about 2000 years ago.

It is the most resistant cereal, able to adapt to barren soils and cold and rainy climates. It tolerates acid, sandy soils.

Resistant to extreme temperatures up to -16 º C and drought, it can grow up to 3,000 meters above sea level. 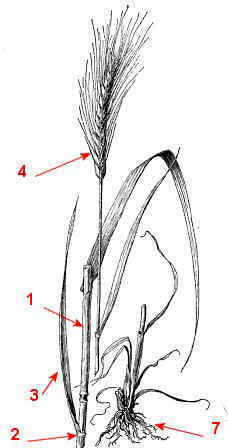 General aspect of the plant 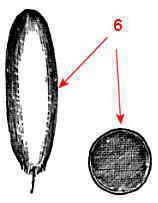 Rye is an annual plant of the grass family (such as millet or barley)It is, after wheat, the most important bakery cereal. This is because its gluten is capable of forming a “network” which helps to capture the gas formed during fermentation of bread, making it more spongy.

The rye plant is generally between 60 to 80 centimeters and 1 meter tall (or more than 1.8 meters tall some varieties)

Its stem (1) is long, flexible, hollow, rod-shaped with structural nodes (typical of grasses). (2)

This stem stands of fasciculate roots, (7) such as in other cereals, though much more developed. It can reach 2 meters deep, allowing it to grow in extreme climates wich makes it a very rustic plant. Other cereals present shallower rooting, as in the case of oats (103-134cm deep) and wheat (134-164cm). For this reason, rye is much more resistant to dry climates.

Its leaves (3) narrow, lanceolate or glabrous, grow alternately on the stem. They are bluish-green.

Like other grasses, its inflorescence is a long, thin spike (4), which can range from 10 to 15cm, comprising spikelets distributed along a spinal column or shaft, which is joined directly (without stem).

Rye flowers are hermaphrodite (5) and consist of three stamens and an ovary, hairy at the apex. Rye only bears three flowers, of which only two are fertile.

The fruit (6) is a naked seed caryopsis When removing the husks in the process of threshing, its grain appears: grayish-yellow, elongated and pointed, of about 6-8 mm long and 2-3 mm wide.

Noted for its nutritional content, the grain of this plant, has traditionally been used for the production of bread and as a food grain.

– Carbohydrates are the major components of the grain, like in all cereals. Rye is a good food source of complex carbohydrates, providing 69.76 g per 100 g, so it contains a little more than wheat. Of these carbohydrates, we have to consider rye is rich in pentosans, substances responsible for the viscosity of the mass of rye flour very suitable for making bread.

– Protein: The main protein content is gluten, so it’s not a cereal suitable for people allergic to gluten.

– Fiber: Rye is a fiber cereal, and it excels in the quantity of mucilage.

– Minerals: With a high content of zinc and selenium, both of them with antioxidant properties.

– Vitamins: Like all grains and foods high in carbohydrates, rye contains lot of vitamin B that helps the body’s absorption of carbohydrates, and enhances its beneficial effect on the nervous system. These vitamins are predominant in whole grains, and most of them disappear in the refining process (eg, white rice).

They differ by their resistance to the types of climates, their productivity and, in some cases, because of their protein content.

Most rye is grown in winter, and harvested in autumn or spring (depending on variety).

To increase plant productivity genetic experimentation has played a key role. It has managed to double the number of chromosomes of rye, which is diploid (14 chromosomes) and convert it into tetraploid (with 28 chromosomes). This results in greater productivity, twice the total weight.

Among the most important varieties we can consider:

– Tetra Petkus Rye: German variety with short spikes, also tetraploid. Despite its small size, it has a high productivity.

– Galma rye. Ii stands among the first varieties of recorded rye . Many countries have discarded this variety, since there are now more productive varieties of rye. Among the diploid rye varieties, we can include Royal and Varne variety with a high resistance to low temperatures.

– “Triticale“. Is not exactly a variety of rye, but is considered another type of cereal. Triticale is obtained by hybridization of wheat and rye.

Rye cultivation has declined significantly over the years, perhaps because it has always been considered cereal of poor and cold regions.

There are cultures where rye is cultivated with wheat, constituting the “meslin”. Such crops are also used in some areas to increase productivity in hostile climates, as rye protects wheat from the extreme cold, and the grinding of both flours favours the breading process in a greater degree than when making bread singly from rye flour.

The current world producers of rye are: Russia, Poland, Germany, Belarus and Ukraine. they are mainly countries with cold climates where this plant is perfectly suited.