Leaves with silky hairs on both sides which provides a soft touch. Lower leaves with long petioles up to 25 cm long, pinnate or tripinnade; higher with shorter petioles, sometimes without petiole, with the vertices of leaflets obtuse, what mainly differentiates this species from Artemisia vulgaris, presenting more pointed ends.

Yellow flowers gathered in deciduous inflorescences almost globular (heads) of 3 to 5 cm in diameter, composed of many tubular florets. The heads are arranged along panicles, attached to the stem by long petioles, with a bract at their base that reminds the rest of the leaves. Pendulous heads with silky hemispherical cup is what mainly distinguishes this species from other plants of the genus Artemisia.

Fruits in aqueny. It blooms from July to September. 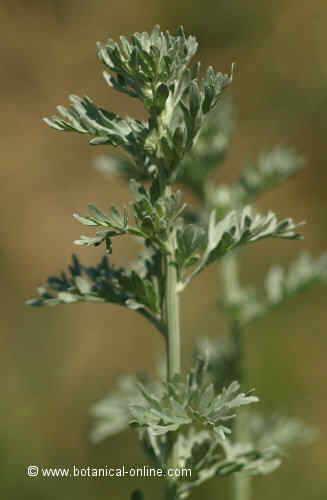 Very resistant to drought, although production is better with moderate rainfall (about 400 liters per year). It prefers dry environments and with good drainage because they increase the quality of their flowers.

– Gardening: For flowerbeds in the sun, for its aroma and color of its leaves and as aromatic and medicinal plant.

– Suitable species and ecological remedy against pests: For its peculiar smell, wormwood has been used as a resource to ward off pests of cultivated plants. Its roots secrete components that appear to inhibit the development of weeds.

It has also been used to repel fleas and moths inside the houses. Wormwood is toxic to caterpillars. Planting wormwood near the plants affected by these worms helps prevent these to approach to garden plants or vegetables. Spraying plants with an infusion of wormwood, helps eliminate aphids.

– Beberages: For the manufacture of absinthe and other liqueurs or cocktails

– Spices: The leaves of wormwood can be considered as a spice in the kitchen

Very hardy plant, it prefers to be exposed to the sun, but it also tolerates partial shade. Highly resistant to frost but it prefers to be protected against wind. The best exposure is facing south or southeast.

– Although it fits virtually all soil types, it prefers well-drained soils, with plenty of organic matter.

– It can live in rocky and sandy soils but it does not like clayey solils.

During the growing season fertilize with 800kg / ha of each of the following fertilizers: ammonium sulfate, phosphorus pentoxide and potassium hydroxide.

There are three ways to reproduce wormwood:

– Reproduction by seeds planted in hot seedlings in February: Keep the seeds in sand. Clarify when the new plantlets develop about 4 leaves, keeping a distance of about 5 cm between them.

When new seedlings have reached 6 or 7 fingers plant them in its proper place leaving a distance between 60 and 80 cm between plants.

– Reproduction by division: When spring starts some children of the mother plant can be separated and planted in their final place. This type of reproduction produces less productive individuals.

– Reproduction by cuttings: Arriving February, cuttings of about 15 cm of developed plants are cut. The leaves are removed and planted about 4 fingers deep. Water to keep them moist until they produce roots. They can be transplanted to their final place in late winter.

Among the maintenance tasks we must include:

– Water about 4 times in summer.

– Prune in the fall to prevent the plant becomes ungainly

– Harvesting takes place after two years of planting. The first time, only one cut is made. In subsequent collections two cuts, one mid-summer and another it early fall.

The main diseases that can develop are fungi, especially in spring when the humidity or soil is abundant and when the temperature difference between day and night are high. To prevent its occurrence, it is better to make a preventive treatment in early spring with a systemic fungicide.