Home › Food › Blackcurrant properties
This article was endorsed by Elisenda Carballido - Dietitian nutritionist. Postgraduate in Phytotherapy and master in Nutrition and Metabolism.

Habitat: Like redcurrant, it also has Euro-Asian origin. You can find even in the wild in forests of eastern France, although it appears in crops in many parts of central Europe.

Blackcurrants are very common in the UK, being grown everywhere. The reason for this is because its cultivation was encouraged by the British government during World War II. In the absence of other fruits rich in vitamin C, such as citrus, the citizens were advised to plant blackcurrants in their gardens because they were very rich in this vitamin, so they could prevent many diseases caused by their absence, especially scurvy. With this fruit currant liqueur and blackcurrant syrup were mainly produced. The latter was provided free to all children. 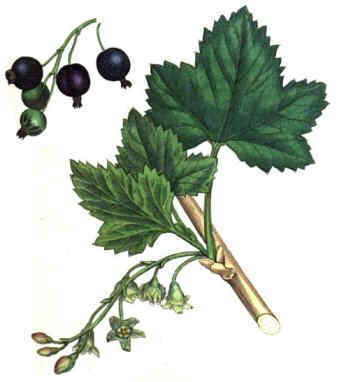 Drawing of the plant with a detail of the fruits

It differs from the common currant or redcurrant species because of its black color fruits and because it looks less tall and wider. Its leaves are more aromatic by the presence of yellow-secreting glands located on the underside. Its flowers have reddish tones inside.

The fruits have similar edible properties to red currant, although more pronounced. (See redcurrant properties in the listing above) With this bush, currant liqueur is made.

Black currants are less resistant to frost than red or white, so they should be planted in places where frost does not occur. They are also more affected by air currents.

Blackcurrant provides berries before the redcurrant because its fruits grow on the young branches of the same year, while redcurrants appear on old branches. Blackcurrants are more demanding in terms of soil while they require much compost. (See currants cultivation in the listing above)

Blackcurrants are a very effective anti-inflammatory and diuretic remedy

The medicinal properties of black currant are based on the capacity of this plant flavonoids, especially anthocyanins, to reduce inflammation and increase diuresis. It has been found that the leaves and young buds have similar properties to cortisone but without the disadvantages of this.

Its antiinflammatory, combined with its diuretic power has not only been used to decrease the pain of inflammation of rheumatic nature but, at the same time, preparations of leaves and buds of the plants are able to reduce the accumulation of fluids that are produced in joints affected by these diseases.

Among the main ailments that can be remedied, we have the following:

– Arthritis: The use of this plant reduces inflammation of the joints and diminishes fluid retention in affected areas. (Infusion of 2 or 2.5 teaspoons of dried leaves per liter of water. Take a couple of glasses a day)

– Gout: Use the above preparation is useful to relieve pain of gout and reduce inflammation. (Infusion of 2 or 2.5 teaspoons of dried leaves per liter of water. Taking a couple of glasses a day)

– Fluid retention: This remedy is effective in people who accumulate liquids. By increasing urination, its help eliminate edema. (10 ml of fluid extract of leaves per day, divided into two doses after the two main meals. Sold at pharmacies or herbalists) Do not use when fluid retention is caused by kidney or heart failure, except when the doctor considers it convenient!!!.

Blackcurrants improve circulation and the health of capillaries

The venoprotective cardiotonic properties of flavonoids have been tested extensively. We also know that these components improve the strength of the capillaries and promote its elasticity so they are very useful for improving blood circulation and prevent strokes.

Many diseases or abnormalities that are caused by blood flow problems may improve if the organism is supplied with abundant flavonoids.

The fruits of black currant are rich in anthocyanins, that are flavonoids that give the so characteristic reddish violet responsible for such outstanding medicinal properties.

From the fruits of black currant fluid or dried extracts are produced, syrups and tinctures which are used in the treatment of circulatory abnormalities including:

– Arteriosclerosis: This plant will help improve poor circulation of people suffering from arteriosclerosis. (Drops of fluid extract of fruits sold in pharmacies or herbalists, under the conditions of the patient’s leaflet)

– Phlebitis: The anti-inflammatory and circulatory properties of this plant can help reduce inflammation of the veins, especially when it is caused by poor circulation problems. (Drops of fluid extract of fruits sold in pharmacies or herbalists, under the conditions of the patient’s leaflet)

– Varicose veins: Varicose veins are caused by poor circulation. The syrup of fruits of blackcurrant improve varicose conditions when it reduces its size and diminishes the pain and heaviness that they produce (syrup of blackcurrant fruits according to the terms of the patient’s leaflet. Sold at pharmacies and health food stores)

– Hemorrhoids: Similarly, the earlier treatment is useful in case of hemorrhoids. (syrup of blackcurrant fruits according to the terms of the patient’s leaflet. Sold at pharmacies and health food stores)

– Stroke: After strokes blackcurrants improve the patient’s condition affected by brain spills. (Tincture or syrup fruit, according to the terms of the patient’s leaflet)

Many eye diseases are caused by a problem of non-adequate blood irrigation to these organs. Moreover, the action of free radicals on the retina produces a degeneration of retinal rods that are responsible for capturing light. Flavonoids have antioxidant properties and are therefore capable of preventing the degeneration of photoreceptors while increasing blood flow.

The use of this plant is effective in treating vision diseases like:

– Loss of night vision: Night blindness is the result of low vision in dim light. Preparations with black currant fruits help capture more light so that the patient can see better at night or in low light. (Tincture or syrup fruit, under the terms of the patient’s leaflet)

– Myopia: It has been demonstrated the ability of flavonoids to improve distant vision loss of short-sighted people. (Use the treatment mentioned before)

– Macular degeneration and vision loss: for its antioxidant properties and its ability to protect the capillaries of the retina, the use of this plant is appropriate in cases of macular degeneration. (Use the treatment mentioned before)

Blackcurrants are good to keep your hair

Capillary fragility is often due to a problem of blood supply to the hair root. Many studies have demonstrated that flavonoids enhance capillary resistance and favor that these do not break and therefore are suitable for increasing blood flow in areas outside of the organism.

Many problems of lack of hair growth or hair loss is due to that, over the years, the capillaries that irrigate the hair provide much less blood, therefore, much less nutrients to the scalp.

Taking preparations from the fruit of blackcurrants (fluid extract, syrup or tincture), according to the terms of the patient’s leaflet may help improve hair health and stop or prevent its fall.

The fruits of blackcurrant contain many tannins. Eating fresh or prepared blackcurrant fruits is appropriate to stop diarrhea. In Scandinavia the skins of these fruits is used with the same purpose.

Pectin also contributes to the same effect. This type of fiber forms a gelatinous mass in the intestine that absorbs many particles and microorganisms that cause putrefaction causing flatulence, diarrhea, etc..

In external use, the tannins have astringent and antibacterial properties making them ideal for the treatment of inflammations caused by infections. The juice of the fruits of this plant, used as a gargle is very suitable for the treatment of tonsillitis, pharyngitis, mouth sores, etc..

The seed oil of blackcurrant

Oil from blackcurrant seed is one of the products obtained from this plant more used in natural medicine nowadays, because it contains essential fatty acids Omega-3 and Omega-6. (See more information about this oil in “blackcurrant oil” in the listing above)

OTHER USES OF BLACKCURRANTS

In addition to its uses as fruit and its medicinal uses, blackcurrants are used for the manufacture of vodka, which they give color and flavor to. Also used in the production of certain beers, ciders or the French liqueur Creme de cassis (blackcurrant Creme). In some places its dried leaves are used as flavoring.

The fruits can be used to make a natural dark purple dye and with the leaves, yellow dyes.

The cosmetics industry uses the oil from its seeds in the manufacture of beauty and health products for the skin, such as creams, soaps, lotions, etc.

The food industry uses its fruits for making pies, cakes, jams, jellies, yogurt, ice cream, etc.. Using the pigments of the blackcurrant fruits many prepared foods are colored. You can also find its juice or alcoholic or non-alcoholic liquors in many food stores.

Toxicity, contraindications and side effects of blackcurrants

No side effects have been reported at therapeutic doses.

Do not supply this plant to people with fluid retention caused by heart or kidney failure.

Black currant preparations, including beverages, should be diluted not to produce tooth decay.

Some people are allergic to these fruits so they should avoid them.

More information about blackcurrants and redcurrants.