What are spices suitable for

“Spice” is how a a vegetal part with aromatic or spicy properties is denominated. The term is usually applied to those seeds, fruits, twigs, rhizomes, flower stigmas, leaves, buds or other parts of a plant that came from tropical places, but in reality, in a broader sense, aromatic or culinary herbs are also considered spices.

The man has dealt and worked with spices from ancient times. The desire to possess such plants has responded to two main reasons: The need for some kind of seasoning that will give good flavor to food and, where appropriate, to mask any unpleasant odors that are normally produced in food when they are stored, especially those of animal origin.

Moreover, the species have essences, which, besides having flavoring capacity, are able to preserve them against the development of microorganisms. 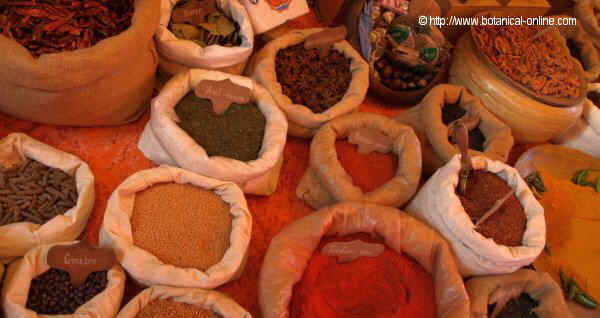 Spices in a market

What is the flavor or aroma of spices?

Spices must to their aromas or flavors to the essential oils that they contain. These components, which were developed by plants as a defensive means to counter the attack of herbivores, are useful to human beings.

Take for example the case of one of the most important spices, anise. The fruit of this plant contain up to 25 aromatic compounds (anethole, linalool, thymol, eugenol limonene, etc.). From all that abounds in a higher proportion is anethole (also called trans-anethole).

This component is very pleasing to the human palate it is very sweet. We know that has 13 times more sweetness than sugar itself, but it is one of the antibiotics, fungicides and insecticides most widely recognized and even toxic to humans when taken in large amounts

The spices in history

Since ancient times spices have been an extremely important product for men. The very name “spice” from the Latin “species”, meaning the basic or essential. Its importance lay in the ability of these products to change the flavor of food and to preserve, as well as its role as a natural medicine and perfumery.

Nor should we forget the mystical or sacred properties of some essential oils. It is enough to quote the Bible chapter of the Adoration, in which the Three Wise Men offered Jesus gold, frankincense and myrrh.

Frankincense and myrrh were already used by the Egyptians in their religious ceremonies and their importance was such that this town had a very important trade with the East to stock up on these and other basic spices in their food like saffron or mustard.

Its importance was such that, at first, many ancient cultures have sought the secret of their culture surrounding it with fantastic and mysterious properties to keep control of them by other peoples. Of cinnamon, for example, it is said that growing up in lakes is guarded by winged dragons.

Gradually, as their use spread, the different people were accessing them.

The desire to obtain these products was all a cultural phenomenon, social and economic, known as spice trade, which led many people to make distant voyages to distant lands.

The spices in the world

Although the number of spices used by the majority is rather limited, we have to consider that there are many species around the world, some of which are only used by small local minorities and are unknown in other cultures.

Almost everyone knows pepper and understands how to be used, but few people know that there is a monk’s pepper, a spice that can be added to food to reduce excessive libido.

It is considered an exotic plant, hidden in the depths of a tropical jungle. In fact, this spice is derived from the fruits of Chasteberry, a shrub that can be found adjacent to many rivers or streams in the Mediterranean. In this case the lack of use of these fruits make use of this fruit in something unknown.

Sometimes the lack of spices is because its growth and its use takes place in remote locations. We can consider Tasmania pepper is a species almost unrecognizable to the majority. This spices is made from the fruits of Tasmania lanceolata, a shrub about 5 feet high that grows in New Zealand, Indonesia and throughout South America. It is a spice from its dark green leaves, you get this fragrant, pungent and jungle aroma.

Spices and herbs have been used since ancient times for different purposes. Originally, most of them were used to preserve food. Within this group would have spices like cinnamon, cloves and turmeric. Its fungicid, bactericide or bacteriostatic properties kill or inhibit the growth of organisms that might spoil the food.

The survival value of spices is shown in ointments that the Egyptians used to preserve mummies. The majority of its membership consisted of spices, especially cinnamon, cassia and myrrh. Pepper and cinnamon are reputed to be the best food preservatives.

Closely related to this function is the fact that spices can disguise the bad taste or smell of food. This is evident especially in warm places, where the heat promotes the decomposition and is the leading cause of odors. Thyme or rosemary are part of Mediterranean cuisine and offer to this scents that provide their essential oils. Basil is part of this cooking and plays a major role in Chinese cooking.

Sometimes spices are used in natural medicine or home remedies. We must not forget either the use of spices in the kitchen, as resources for the cosmetics industry. Neither the ritual or drug use.

Spices for the kitchen

The commerce of spices