BENEFITS AND MEDICINAL PROPERTIES OF TURMERIC 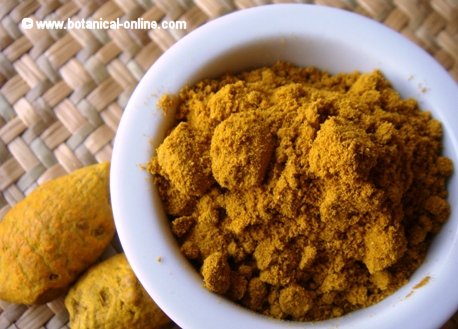 Root and powder of turmeric

Turmeric (Curcuma longa L.) is a plant of the Zingiberaceae family, botanically related to ginger.

The ground rhizome of turmeric is used as a spice and a dye in the traditional cuisine of South East Asia, from where it originates. Turmeric is derived from Classical Arabic “kurkum”, which means saffron, the clear bright yellow dye. It has a fairly neutral flavor, little spicy. It goes by other names, such as saffron or yuquilla stick.

Turmeric also has a great importance as a medicinal plant. It is a plant that has aroused more interest in the West, because of its powerful properties:

It is part of the remedies used in Ayurveda in India and in traditional Chinese medicine.

– Digestive plant: Hot spices like turmeric are very important in tropical countries for its digestive properties. Using them in cooking is a clear sign of wisdom. In particular, turmeric is a spice that seems naturally designed for the stomach because it stimulates mucus secretion and improves digestion.

– Turmeric to prevent gases: Turmeric is carminative, that is, it helps expel intestinal gas, so it is also recommended to relieve flatulent colic, for people with bloating and flatulence. The active carminative components are zingiberene and eugenol.

Modern studies have shown that turmeric is very beneficial for patients with acid dyspepsia, flatulence, stomach swollen and sluggish belly, making it an ideal plant for the digestive system.

Turmeric for stomach ulcer and heartburn

Turmeric is a stomach tonic that stimulates digestive secretions and helps digestion. It is recommended to inapetentes people with dyspepsia or slow digestion and is particularly recommended for chronic hypo gastritis acid (for lack of secretions in the stomach).

It contains zingiberene, an active ingredient with anti-ulcer properties, and a substance called 1-phenyl-hydroxy-N-pentane, which stimulates the secretion of secretin, gastrin and pancreatic digestive juices; and contributes in maintaining gastric pH.

These indications were confirmed by the Commission on 1997 E. Phytotherapy and herbal substances, and the German Federal Institute for Drugs.

Turmeric for upset stomach (dyspepsia): turmeric extract capsules, from 1.5 to 3g daily. You can buy buy empty capsules or tablets at the pharmacy and fill turmeric powder.

Enter turmeric recipes (in purees, sauces, omelets, soups,…) (Add turmeric powder at the end of the preparation, 1-3 minutes before turning off the fire)

Turmeric: a protective plant for the liver

Turmeric is a powerful liver protectant, used as a folk remedy for centuries in many parts of Asia. This effect is due to its hepatoprotective properties and its antioxidant components since int increases the levels of glutathione (natural antioxidant of the body). Scientific studies have reported on the ability of turmeric as biliary tonic and liver protective.

In vitro and in vivo studies has shown turmeric hepatoprotective properties. The responsible principles are curcumin and other curcuminoids found in the rhizome of turmeric (3-5%). It also contains other beneficial products for liver function such as borneol, turmerone (tonic and protective biliary), eugenol and caffeic acid.

Some studies suggest that curcumin may also have cholecysto-kinetic action, that is to say, it helps remove gallbladder stones, and also has an anti-inflammatory effect. Turmeric is also choleretic and cholagogue, which promotes drainage and emptying of the gallbladder. These effects also improve digestion, especially of fats, and is an effective remedy for the heavy digestion as they help digest a heavy or very high fat meal.

We recommend taking turmeric disorders or diseases of the liver, jaundice, cirrhosis, fatty liver, high cholesterol and gallbladder disorders. Gallstones biliary colic use without medical supervision is not recommended.

Turmeric medicinal preparation for the liver: 20 grams (3-4 teaspoons) of rhizome of turmeric powder, infused in 1 liter of boiled water. Stand for 12 hours. Filter with the aid of a cloth and drink preparation in divided doses during the next 12 hours. (Capsules: Take turmeric extract capsules as recommended on the package)

The rhizome of turmeric contains at least 10 components with anti-tumor properties, among which curcumin and curcuminoids, beta carotene, curcumenol, curdione, turmerone, terpineol and limonene. Their anticancer benefits have been proven effective to act from cancer prevention and to improve cancer treatment.

Recent research on the effects of supplementation have shown that turmeric curcuminoids have protective effect against skin cancer, duodenal cancer, breast cancer, and colon cancer. It is used to help the body overcome the effects of anticancer drugs.

Its ability as a liver tonic and antioxidant stimulates detoxification of the body and prevents the formation of toxic substances (carcinogenic nitrosamines that are formed from the food nitrites) also helps repair damage in the liver by certain drugs.

Turmeric is added to the end of cooking (1 minute before turning off the fire), so it retains its anti-inflammatory principles.

Turmeric has potent anti-inflammatory properties on the organism, due to its content of curcuminoids, which inhibit the production of inflammatory prostaglandins type 2.

You can also get an anti-inflammatory diet by adding at the end of cooking 1 teaspoon turmeric in all recipes. (Cooking destroys curcuminoids)

Some studies compare the effects of turmeric with corticosteroids, with the advantage that turmeric does not have the side effects of these drugs.

Turmeric has been used for generations by traditional Chinese medicine for the natural treatment of depression and mood disorders.

Scientific studies have found the antidepressant effects of turmeric extract in vivo. Turmeric has stimulant compounds for nervous system, immune system and mood. The turmeric extract attenuates the physiological consequences of stress.

It works by inhibiting the enzyme monoamine oxidase A (MAO A), resulting in higher levels of serotonin.

All scientific studies conclude that turmeric is a good natural antidepressant, and can be used in people with depression, seasonal affective disorders or depression.

Turmeric components have cardioprotective properties. In studies, turmeric combat oxidative stress or damage to the heart by increasing antioxidant enzymes, vitamin C levels in the heart, and reduce nitric oxide (substance whose high leves increase strokes), being a good adjunct in the treatment of heart disease.

It has also been shown to reduce cholesterol and triglycerides. Accompanied by a proper diet, turmeric seems a good ingredient to improve cardiovascular health through food.

Turmeric has been used in the natural treatment of bronchitis, because of the antibronquial and anti-inflammatory action of curcumin. It is also a promising plant for the treatment of asthma and of oropharyngeal candidiasis which usually occurs in people with asthma because of the side effects of some medications used to treat it. One study showed that turmeric helped improve chronic asthma and also reduced the presence of fungi (oropharyngeal candidiasis). Some studies point to possible immunomodulatory activity.

Its use is also suitable for the treatment of COPD, which is recommended for its anti-inflammatory, antioxidant and antibronquiales principles. (Take 500mg. Of turmeric three times a day. Take turmeric in the diet).

Turmeric scientific studies have demonstrated immuno-modulatory capabilities, acting through cytokines and T helper lymphocytes. The rhizome contains ukonan A (mainly), B, C and D, a type of polysaccharide with immune activity. Immunomodulators are also other components in the rhizome as limonene, zinc and copper.

It has to be introduced as a a spice in our dishes especially in times of stress, exams and catarrhal conditions. Some studies suggest that turmeric may be a good complement in psoriasis. 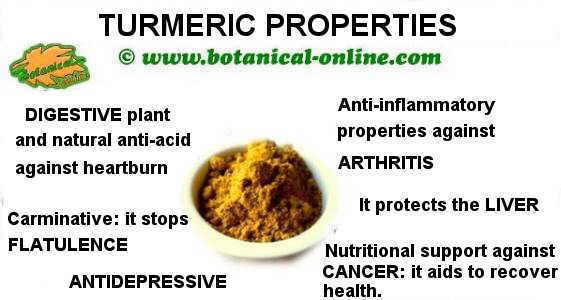 Print summary of some of the medicinal and healing properties of turmeric.

Turmeric can be found in a variety of establishments. As a spice used in cooking, it is possible to buy in the markets and in the spice section of the supermarket.

It is also the major component of many spice blends curry or Indian masala, which can be purchased at Asian food stores.

Attention! There is a food dye called tartrazine which at first glance may be confused with turmeric, especially if they have never purchased before. The seller may think wants yellow dye, and sell tartrazine, or just be confused by ignorance.

Tartrazine is of chemical origin and is not recommended, because it has been linked to allergies, activity disorders and hyperactivity in children.

For this reason it is recommended for people who do not know this plant to buy packaged curry and not to get it in bulk.

Turmeric supplements: By taking turmeric capsules or tablets is generally desired to obtain a high and controlled amount of active ingredients of the plant (curcuminoids). Although not essential, it is recommended to consult supplement ingredients on the label and look for the words “extract” or the amount of curcumin it contains.

How to take turmeric?

The best way to take anti-inflammatory, hepatoprotective and antioxidant turmeric is commonly use in food.

It is important to add turmeric to the end of cooking, for example, 1 minute before turning off the fire. Cooking destroys the curcuminoids, the active ingredients of turmeric. It is estimated that 15-30 minutes of cooking, lost over 80% of curcuminoids. You can also add to the raw recipes, for example in a homemade mayonnaise, salt, herbs, within the sandwich, a gazpacho, etc.

To enhance the effect of turmeric is recommended to combine it with a pinch of black pepper, since piperine (spicy substance of pepper) increases the absorption of curcuminoids.

It also has a synergistic effect with anti-inflammatory properties of bromelain from pineapple. (Eg, eating pineapple dessert)

Capsules of turmeric: Although it has a fairly neutral flavor, an option for people who do not like cooking with turmeric is to by empty capsules at the pharmacy and fill a little turmeric and black pepper (1 pinch of pepper, 1 teaspoon turmeric).

What is the recommended dose of turmeric?

– The recommended amount is 1.5 to 3 grams turmeric daily.

There is no restriction on the duration of treatment, but you should always consult a doctor when symptoms persist or worsen.