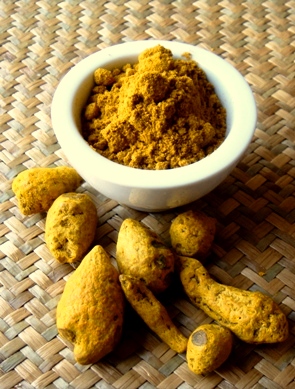 Turmeric, stick, saffron or yuquilla root (Curcuma longa) is a popular aromatic spice in the traditional cuisine of South East Asia, where it originated. Its name derives from the word “kurkum”, which in classical Arabic means “saffron” and this name is due to the intense yellow color it has. For example, turmeric is the main coloring of Curry mixture.

The plant part used is its rhizomes, which are usually used ground as a spice and a dye.

Botanically, turmeric belongs to the family of Zingiberaceae and, sensed as its name, is from the same family as ginger. In fact, turmeric and ginger are very similar, and was it not for the striking bright yellow color of turmeric, these two spices could be confused easily.

In the European Union, it goes under the number of additive E-100.

What flavor is Turmeric?

Turmeric gives a peculiar spicy, slightly bitter, soft and warm flavor to dishes. It also has an intense bright yellow color that illuminates and gives life to the recipes.

* More information about the medicinal properties of turmeric.

How is turmeric used?

Turmeric is an aromatic spice that can be taken in several ways:

Spices to match with turmeric