Home › Food › Properties of pineapple
This article was endorsed by Elisenda Carballido - Dietitian nutritionist. Postgraduate in Phytotherapy and master in Nutrition and Metabolism.

Pineapple is the fruit of pineapple (Ananas comosus), a plant of the Bromeliaceae family which contains about 1400 species worldwide. Many members of this family are epiphytic, meaning they live on other plants in tropical climates. Pineapple, unlike them, is born on the mainland. Many of the same family members are known as garden plants, such as scarlet star or silver vase.

Pineapple plant is a perennial plant with a rosette of pointed leaves up to 90 cm in length. The center of the rosette arises in a stem, at the end of which there are flowers that give rise to an infructescence known as pineapple, which is actually a multiple fruit. Each pineapple can weigh up to 4 kg.

It comes from the tropical zone of Brazil, Argentina and Paraguay. It began to be cultivated for the first time in the late nineteenth century on the island of Hawaii in its variety ‘Smooth Cayenne, which even today is the most common sold variety. It is now cultivated in most tropical countries of the world, up to 800 m in altitude or in Ecuador at higher elevations not exceeding 800 m. Among the producing countries we have Brazil, Thailand, Philippines, India, Hawaii, Mexico, Indonesia, Vietnam. Ivory Coast, Costa Rica, Honduras, Ghana and South Africa. The Philippines is the world’s largest exporter. 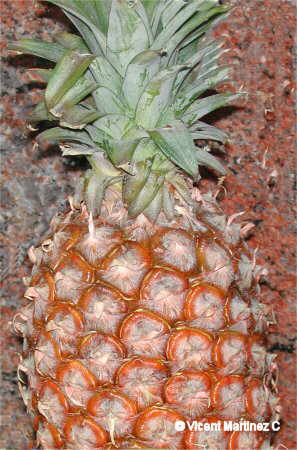 Besides the variety ‘Smooth Cayenne’, we can find other like:

– Queen: that is grown mainly in Australia and South Africa. It is smaller than the above mentioned and more rounded. Although it tastes good, it has little juice.

– Red Spanish: It is grown mainly in Cuba and Puerto Rico, especially for the production of canned pineapple.

– Pernambuco: Grown in Brazil.It has lots of flavor and much aroma.

– Dwarf: These are varieties within the Queen, with a maximum weight of half a kilo.

– Amazon: It is grown in South America and, unlike the previous one,this is very large, with white meat and very tasty. 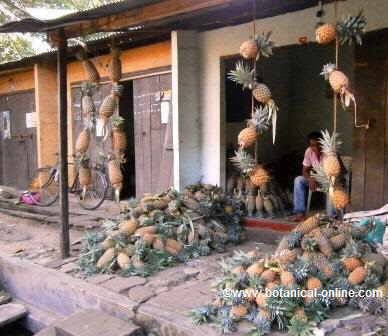 Selling pineapples in a tropical market

A good fruit for circulation

Besides his wonderful flavor and its unmistakable aroma, one should know the properties of the pineapple, which is one of the healthiest fruits.

Due to its content in bromelain, which is composed of three combined enzymes (bromelain, ananasa and extranasa), it is very appropriate for circulation since this component dissolves blood clots and thins the blood.

This is a good way to avoid circulatory problems such as thrombosis, heart attacks, strokes and at the same time it reduces high blood pressure or hypertension. 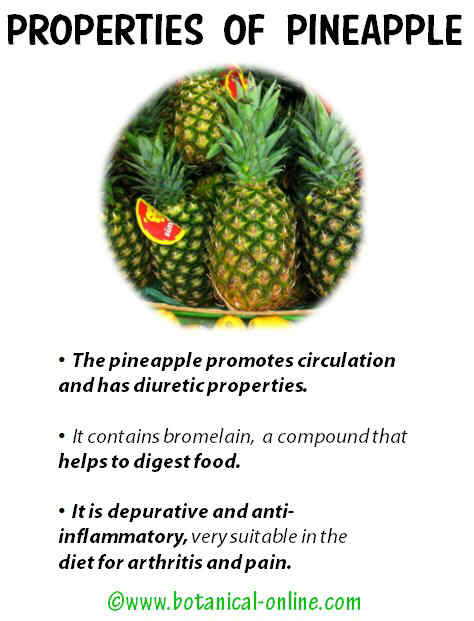 In addition to its anticoagulant properties, bromelain has the power to “digest” the proteins so it will be helpful in the process of digestion. A good chunk of pineapple after finishing allows us to digest food better, helps the stomach to do its job and to feel less full more quickly.

This involves the disappearance of a number of unpleasant side effects associated with the heavy digestion of food,such as flatulence, slowness of stomach, heartburn, etc. This property is used by the food industry so as to soften prepared meats.

Nevertheless, this fact harms the composition of the enzyme that is destroyed with the heat and causes that it is not usable by our body, reason why we will have to eat the fresh fruit if we want to take advantage of its properties. This virtue, however, can be used when cooking meat. If we add to the stew a piece of pineapple or a splash of juice, we will soften it so it will become more edible, tender and juicy.

Proteolytic enzymes provided by some fruits, such as bromelain from pineapple, are very useful to treat pancreatitis, since they help the pancreas to disgregate food proteins into peptides which are transformed into aminoacids. People affected with pancreatitis are not able to produce the necessary enzymes for digestion so bromelain can be very helpful in this case.

This capacity to digest proteins can be used to our favor to eliminate microorganisms and parasites from our body. For that reason pineapple exerts a purifying function of the digestive tract and helps to eliminate the bacteria that cause intestinal putrefaction, responsible for the appearance of pain in the bowels or diarrhea. It can also be used, as it has been done in China, to eliminate intestinal worms. The treatment consists of eating pineapple only for two or three days.

Bromelain not only digests protein, but its power to digest fats has been proven; this can be applied in the treatment of obesity. Its richness in fiber, pectin and vitamin C and its low calorie content can help you perform the same function.

There is the possibility of the pineapple diet that consistis in eating a pineapple a day. This diet, followed from time to time, can help reduce some excessive weight after a weekend of good food.

Pineapple is a good diuretic. In addition to asparagine, as discussed in the asparagus, and bromelin, it contains, among others, potassium that neutralizes sodium, caffeic acid and arginine. All of them help to eliminate water of the body, reason why they avoid the formation of edemas or liquid retention in the body and can be useful.

Besides reducing weight, it is very useful for many conditions that are related to water retention in the body: gout, uric acid, arthritis, etc. This same property has been used for the treatment of cellulitis, a disease caused precisely by the failure of drainage of the adipose tissue cells. Using diuretics is particularly interesting to solve it.

A good resourse to diminish your appetite

Because of its anorectic properties, pineapple can be used to diminish one’s appetite, helping to eliminate hunger between meals at the same time being able to reduce appetite after each meal. (Finish your meals eating a slice of pineapple) 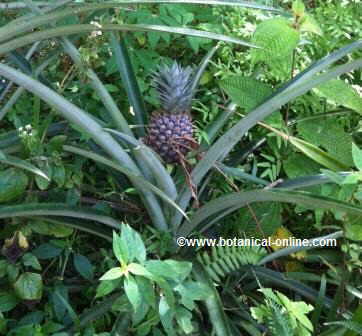 Photo of a pineapple plant with its fruit

It has anti-inflammatory properties, which make it useful to reduce pain. Eating pineapple is a common feature among all the athlete to prevent inflammation of the tendons (tendinitis) or the synovial sacks (bursitis)

Adding pineapple to salads, mixed possibly with papaya that also contains bromelain, help to overcome joint pain, not only for athletes but for all people in general. Back problems, sprains or dislocations could be less painful and heal before with a good diet, rich in pineapple.

Scientific studies suggest that this fruit may improve symptoms of inflammation in people with lupus. The same studies showed that when combined pineapple consumption with turmeric (such as a spice in food), the anti-inflammatory effect is greater.

In many countries this fruit is considered a good stimulant

Eating this fruit could be adequate to stimulate desire.