An aromatic spice for the digestive system

Cardamom is, since ancient times, the quintessential digestive plant. It has many properties for the digestive system along with a pleasant fragrance, reason why it is considered a highly valued medicinal plant and spice.

Remnants of these applications are still in Arab countries, where they traditionally use cardamom as a condiment and for digestive infusions.

Cardamom stimulates appetite. Since ancient times, cardamon is used as a sialagogue remedy (it stimulates the secretion of saliva) and as an orexigenic remedy (it increases appetite). It is given to individuals with poor appetite, listless people, those wishing to gain weight or with Sjögren Syndrome.

Modern studies have shown that this plant increases trypsin activity. Trypsin is a substance (an enzyme) that helps in the digestive process. By stimulating effect, cardamom promotes better digestion of food in the stomach.

It is recommended for people with problems with digestion, for example after eating. This is a traditional habit in Arab countries, where a few seeds of cardamom are generally served along with desserts and coffee.

Cardamom essential oils contain cineole, an oil with hepatonic effects and a stomach protector. Cardamom is a remedy for stomach pain and gastritis when taken in teas or tisanes.(A couple of cups a day, before meals of the infusion of 20 g of powdered seeds in half a liter of water) (tincture diluted in water before meals, according to the terms of the patient’s leaflet) 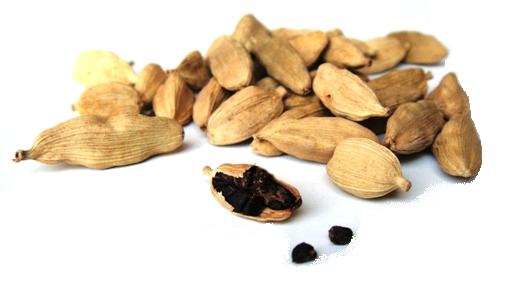 Cardamom also has carminative properties. In herbal medicine is used in combination with laxative herbs such as cassia, Chinese rhubarb and cascara sagrada, because it exerts an antispasmodic action counteracting diarrhea and cramps.

Cardamom is a remedy to treat flatulence, relieve cramps and colic caused by gases. (For these intestinal applications we recommend to takeground cardamom, half a teaspoon in a glass of water, 3 times daily. Or take tea or infusion)

Tincture of cardamom has been used in ancient times to treat the pain of hemorrhoids, applied externally. Cardamom tincture is rich in compounds with analgesic properties.

Note: If you suffer cramps or diverticulitis, it is important not to take the whole seeds.

Cardamom is one of the richest sources of cineol that nature offers. The cineol component is a powerful natural antiseptic that kills bacteria that cause bad breath, being a recognized remedy for halitosis.

Cardamom also helps eliminate the bacteria that cause cavities. In fact, toothpaste brands use natural products rich in plant extracts, such as cineol and geraniol, to develop their products.

The ancient Egyptians used these seeds to maintain good oral hygiene and fight bacteria that damage the enamel. This custom remains today in Arab countries.

Modern studies have found that cardamom essential oils can help fight the bacteria Helicobacter pylori, which causes some stomach pains. (Chew several cardamom seeds until you feel its freshness in the mouth preferably after a meal or during the day. You can also take in teas)

Cardamom essential oil in therapeutic doses has been shown effective in treating Candida albicans infections, so it is interesting to introduce this plant in a diet for candidiasis.

Cardamom, the aphrodisiac of India

Cardamom is a natural remedy to increase libido due to the aphrodisiac properties attributed to it for centuries.

To this effect, cardamom acts mainly by stimulating the nervous system. Its active constituents are cineol, camphor, borneol and geraniol. Furthermore, cardamom contains zinc, mineral constituent of the sex cells.

These seeds contain the androgenic compounds beta-sitosterol and the mineral boron. They are used in herbal medicine to treat erection problems and lack of sexual desire. It also contains stigmasterol and nerol, oestrogenic substances that can help combat the symptoms of menopause.

Cardamon as stimulating and invigorating

Cardamom is a powerful nervous system stimulant due to its high content of aromatic oils. It is believed that, for this reason, it is attributted with aphrodisiac properties. (In the past, people used to drink mulled wine with half a teaspoon of ground cardamom as tonic and aphrodisiac remedy)

The cineol, abundant substance in the cardamom, is also used to prevent fainting.

Cardamon for the respiratory system

Because it is one of the richest plant in cineol in nature, we must highlight the medicinal expectorant properties of this spice. Cineol is a powerful expectorant also present in other plants such as eucalyptus.

Feel free to add the content in seeds of a fruit in the infusion of cardamom for breathing difficulties.

A recent study has reported the ability of cinnamon and cardamom to help prevent colon cancer. These properties are due to the combination of the folowing components: anti-inflammatory, anti-proliferative and apoptosis-stimulating (natural cell death because they were damaged old and / or carcinogenic)

Cardamom also acts as a preventative of cancer through its antioxidant capacity. Its essential oils have high antioxidant effect due to its antioxidant and aromatic compounds which also stimulates the action of antioxidants in the body (GST enzymes).

The extract of essential oils from cardamom is very aromatic. It is used in aromatherapy to treat nervousness, anxiety, mental fatigue, and stress. It can also be applied to treat respiratory problems and aphrodisiac purposes.

Other uses of Cardamom