Characteristics of the metabolism

From a scientific point of view the complex carbohydrates are composed of disaccharides, oligosaccharides and polysaccharides. 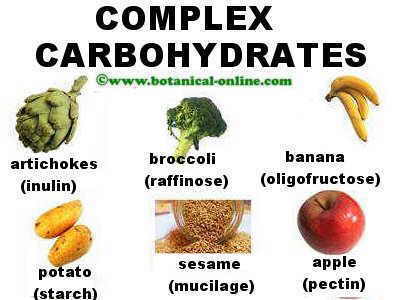 Among the main complex carbohydrates belonging to the oligosaccharides we have the following:

As described side effects, it has increased flatulence and indigestion, because it does not decompose in the intestine. Problems have also been described in the liver, that disappear without this drug.

Among the main complex carbohydrates belonging to polysaccharides we have the following:

It is found in greater amounts in the seeds of cereals, roots (carrots, beets, etc) and tubercles (potatoes, sweet potatoes, cassava, etc)

Mucilage is produced by the plants act as protectors of cells, such as water storage and reserve substances (the cacti and succulents plants are real examples of this) The mucilage can also be used to protect plants by preventing the entry of microorganisms in their wounds.

Other times, they appear in abundance in the seeds of certain plants, like carob bean, plantain, flax or mustard, in fruits as fig and all the plant as borage or purslane, in vegetables such as green beans or lichens, such as Iceland moss. One plant that has more is the algae agaragar.

Mucilage plays a major role in seed germination. (In contact with water, they increase volume and maintain a layer of moisture around the seed that facilitates their germination) and seed dispersal (seed engages to disperser element)

Some roots the mucilage used to promote their introduction into the ground. Comfrey is a clear example of how a component can produce this result. Sometimes these secretions are a means to catch prey, such as with the mucilage secreted by carnivorous plants.

Instead of great amounts of animal meat, we can find these components in vegetables, fruits, dried fruits or cereals.