Any kind of diet, if not done in a balanced, varied way, with an organized structure, which does not contemplate any possible lack of nutrients, can generate inadvertently nutritional deficiencies.

The important nutrients, and, in some cases, the essential ones, if not properly provided, can bring nutritional deficiencies being a risk factor of multitude of problems, disorders and diseases, unnecessary and avoidable with a proper nutrition.

Among the deficiencies of nutrients that are usually more common in vegetarian food, we found an important mineral deficiency, the iodine deficiency

Iodine, what is is for?

Iodine is one of the the minerals that should be part of our diet to maintain the thyroid glands properly working.

Where to obtain iodine from?

Iodine can be found in significant amounts in food and marine animals such as fish and seafood, but also in some other foods, such as iodized salt and some algae.

When our diet does not contain seafood rich in iodine, it can lead to mineral deficiencies that can have serious consequences. If we do not provide the necessary amounts of this mineral, we can develop the appearance of a very showy anomaly called, goiter, in which the neck swells excessively.

It is not only important not to generate iodine deficiency because we look ugly, but if we do not supply the thyroid the iodine required, it will not work properly and this will be the reason for unnecessary health problems. (Consult hypothyroidism) 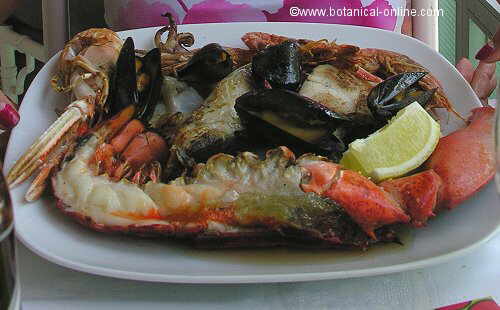 Seafood is very rich in iodine. Vegetarian people do not eat it

Some foods naturally rich in iodine are fish, shellfish and seaweed. Other food to which this mineral is added is iodized salt.

Salt, common salt or table salt, is composed chemically of two minerals, sodium and chlorine. So, it is scientifically called sodium chloride. Currently, there is a variety of salt, called iodized salt. In this type of salt, iodine has been added instead of chlorine (sodium iodide) or changed both minerals (potassium iodide and potassium iodate) to simultaneously reduce its sodium content (beneficial in cases of hypertension).

Other foods to whom we often add iodine are water, milk or even in some flours. Usually, only iodine is added to these foods when they are intended to be consumed in areas where it is urgently required to counteract the deficiency of this mineral, and no other thing can be done.

An example might be, those people living in very remote mountains or the sea without many resources, which grow in soils poor in this mineral and that they have no chance of eating foods high in iodine.

When and why to take iodine supplements?

To prevent iodine deficiency, one should consume half a teaspoon of iodized salt a day. If there is already a shortage, doses should be higher and the food mentioned above may not be enough. In this case, it is recommended that you consult your physician.

It is also true that there may be an excess of iodine intake in vegetarians who do a very high consumption of seaweed. In these cases we must regulate its intake, since all extremes are bad. (Consult hyperthyroidism)

The damage caused by iodine deficiency

The most serious consequence of having very low levels of thyroid hormones is myxedema coma, which is produce by long-term deficiency of thyrod hormone in the blood. It is preceded by characteristic symptoms such as hypersensitivity to cold, extremely dry skin, hypotension, slow breathing, lower body temperature than normal and mental problems.

More information on problems in vegetarianism.