Home › Medicinal plants › Fucus properties
This article was endorsed by Elisenda Carballido - Dietitian nutritionist. Postgraduate in Phytotherapy and master in Nutrition and Metabolism. 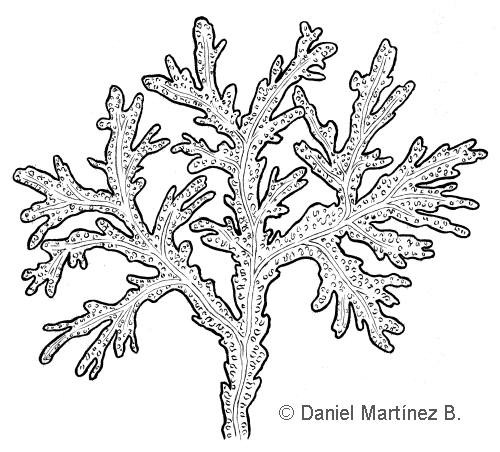 Where to find fucus?

Habitat: It lives on rocks, cliffs, beaches of the Atlantic and Mediterranean colder waters.

It can live several days out of water by secreting a mucus that protects it from drying and sun.

To withstand the cold temperatures of the waters it inhabits, it contains antifreeze properties that allow it to hold while the water around it freezes. In some very cold areas, such as the North Sea, it is one of the few habitats where communities can develop large marine crustaceans and molluscs.

Due to overexploitation it has been subjected, as well as sea nitrification which has reduced the entry of light in water, their communities have been decreasing in recent times, especially those living in deeper water.

Floating vesicles grouped in pairs along the midrib.

Dark brown or olive green with bright gold extremes when in the water, almost black a little while after picking it up.

Reproductive receptacles located at the ends of the blades.

Traditional use of fucus

This algae has traditionally been used in Eastern countries, especially in China, mainly to treat hair loss and to increase desire. It has also been used as a source of calcium and iodine in places where these minerals are deficient in the human diet.

Fucus along with other algae, such as kelp, is one of the main components of the kelp, a plant product that is made from different brown algae.

This product has been publicized in the Western world as a remedy for many diseases, which has led to a proliferation of sales and at the same time, a fierce debate between its defenders and detractors.

INTERNAL USE PREPARATIONS WITH FUCUS VESICULOSUS

Fucus, a remedy for hypothyroidism

Hypothyroidism: Bladderwrack is a species rich in iodine, with content that can reach up to 0.1%. Among other functions, iodine is part of the thyroid gland need to make this work well.

The malfunctioning of the thyroid is responsible for the appearance of hypothyroidism and goiter. Fucus was indeed the main source in the discovery of iodine in the early nineteenth century and has since been used as a stimulant of the thyroid.

Besides iodine, Bladderwrack contains vitamin C and vitamin B both are very useful to regulate thyroid function, and tyrosine, a nonessential amino acid involved in the formation of many hormones.

The application of this plant in the treatment of this disease is an ongoing controversy. While many specialists believe that natural medicines derived from this algae are suitable for natural thyroid treatment, conventional medicine considers the effects of this plant in this disease are very small and, in contrast, the dangers and contraindications of it are so high that not justify its use.

In any case it is recommended that people who want to try this remedy for the treatment of hyperthyroidism do so only with the authorization and prescription. (Take this seaweed in preparations sold in pharmacies and specialty stores. The usual dose is about 650 mg daily of powdered extract of this plant) should be used only standardized products that come from a reliable source.

Do not collect wild fucus

because the iodine content in a fucus sample can be very variable and may inadvertently exceed the recommended dose. Moreover, when the algae are collected along the coast, there is always the possibility of confusing them with other toxic plants can be quite similar or contaminated with toxic heavy minerals such as mercury, lead, cadmium, etc.

Fucus to speed your metabolism

Fucus is considered as an enhancer of basal metabolism. The basal metabolic rate is the amount of calories the body uses in a rest position.

Fucus increases the basal metabolism by stimulation of the thyroid. so we can say that the body “runs faster”.

Diseases of metabolism that can be treated with fucus

This property has been exploited for the treatment of the following metabolic abnormalities:

Its high content of mucilage, a type of soluble fiber facilitates the expulsion of faeces and keeps the feeling of fullness, while avoiding the occurrence of constipation.

Fucus has a great power of absorption

Bladderwrack is rich in alginic acid and sodium alginate. These components have the ability to absorb large amounts of liquid, turning into a soft paste or gel and mucosa.

The properties of this paste are both industrially take advantage either of fucus or from other seaweeds in the food industry as thickeners in the manufacture of ice cream, cakes or other foods.

Fucus medicinally capacity to increase in size is used to treat certain conditions such as:

Fucus as an aid to lose weight

The capacity of the preparations of this plant to increase its size make it able “to fill” the stomach, eliminating the sensation of hunger and compulsive desire to ingest food, reason why some dieticians recommend it for treatments against the obesity or bulimia.

What do studies say about fucus as a metabolism booster?

This determines the fucus is useful in treating skin diseases like eczema, wounds or sores that have difficulty healing. (Clean the affected area with the decoction of two tablespoons of dried plant per cup water)

The contents of a number of toxic chemicals makes many consider this herb as too dangerous for use as a medicinal plant. Among the harmful substances that can cause chemical poisoning are: