Home › Natural products › Properties of plums
This article was endorsed by Elisenda Carballido - Dietitian nutritionist. Postgraduate in Phytotherapy and master in Nutrition and Metabolism.

The best remedy against constipation

The main medicinal properties of plums are their laxative properties, that can be more of less intense according to the different preparations:

Fresh plums constitute one of the best remedies to prevent constipation. This property is conferred by their richness in fiber – especially pectin, fructose and sulfur.

First, the large amount of fiber increases the volume of feces in the large intestine, which causes increased intestinal peristalsis and contraction stimulated by the presence of such accumulated matter.

This causes a more abundant and regular bowel movements. Moreover, it has been found that fructose and sulfur have laxative properties.

Fresh plums are very effective laxatives. Unlike other popular laxatives, such as cassia, they do not create the symptom of “lazy colon” which is characterized by the intestines being used to defecate only when you give them these laxatives.

They produce a soft and long lasting effect. The best way is to eat this fruit on a regular basis, starting slowly to get used to the intestine.

If we want to produce an immediate laxative effect, we can use some of the following preparations:

– Mixed plums recipe for constipation: Very interesting it is the laxative recipe that John Heinerman proposes in his book Encyclopedia of fruits, vegetables and herbs through a combination of plums, figs, coriander and psyllium: Mix five figs, five plums, add a teaspoon of coriander and a teaspoon of psyllium seed.

This must be ground in a blender and stored in a portion the size of a teaspoon in the fridge. For a couple of months these rations can be eaten when needed. It seems that the mix has a good result after a couple of hours.

– Marinated plums for constipation: Another interesting recipe is to peel a kilo of plums and remove the bone. Cook these plums in 4 or 5 liters of white wine for about 20 minutes. Marinate the prunes for 5 days.

Filter and store in a cool place. Now and then you can take a cup of this liquid which is ideal both to raise the spirit, as for settling those intestines which tend to produce very soft stool. 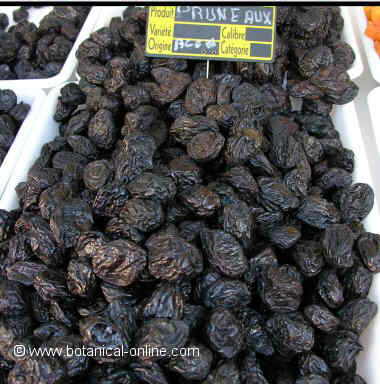 Photo of prunes in a market stall

– Bowel problems: For changeable and variable intestines that cause many changes in bowel and usually manifest themselves irritated, you can use plum syrup. This syrup can be bought in pharmacies or herbalists, but it can be prepared at home (See plum syrup recipe)

– Anemia: Because of its high iron content, the usual intake of this food can prevent the onset of anemia or help healing it.

– Respiratory system: Plums have a very beneficial effect on the respiratory system. Ingestion of these fruits helps combat cough, promotes the removal of accumulated secretions in the lungs and sedates the body. It is deal in cases of bronchitis.

A remedy to settle the stomach

– Digestive system: In addition to their laxative properties, plums are a good remedy to aid digestion.