What is guava (Psidium guajava)?

– Mexico, Central and South America: various vernacular names are used for this fruit, as pichi, posh or enandi.

Habitat: found wild in tropical America. It grows at altitudes from 0 to 1,500. above the sea level. It can be found in other tropical and subtropical areas of the world due to natural dispersal by birds and humans. It has become naturalized in many Pacific islands and tropical or subtropical areas where there is no frost.

Distribution: Where to find guava plants?

The Spanish colonizers exported it outside the Americas.

It came to Asia in 1526, and currently it is an important crop in India and China. U.S. 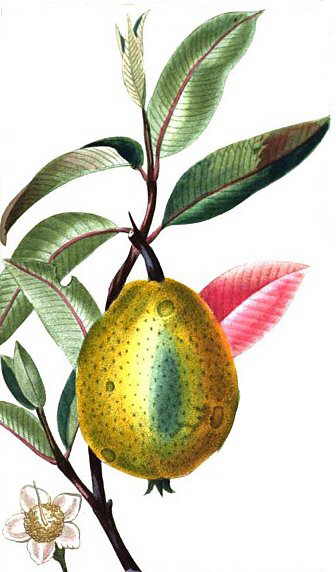 Guava drawing, with the fruit, leaves and a flower

Guava (Psidium guajava) is an evergreen fruit tree, between 3 and 6m up. (Up to 10m.). In nontropical climates, guava is a deciduous tree.

The guava fruit thereof, is surely one of the best known Myrtaceae fruits. They belong to the same family of allspice (Pimienta dioica), which is used in food as a type of pepper, eucalyptus, cloves or guarapurú or jaboticaba (Myrciaria cauliflora) that produces the fruit ibapurú.

The stem is thick, usually inclined and branched into several branches, drawing an open crown, irregular, with dense quadrangular twigs. It has a thin bark, cream colored with pink spots, which is easily removed in long strips.

The leaves are simple, with short petioles, oblong or elliptical, 3 to 16cm. long by 3-6 wide, bright green. Limbo bright pubescent undersides of leaves with prominent veins. The leaves have entire margins, oil-bearing glands that release a pleasant fragrance. This is a common feature in all plants of the Myrtaceae family.

The inflorescences are cymes, or sometimes solitary flowers (1 to 3 flowers) that grow in the leaf axils.

The flowers are large, stalked (1-2cm.), actinomorphic, showy, with white petals, giving off a pleasant smell. They are hermaphrodites, possessing numerous stamens and one pistil. The flowers are pollinated by insects such as bees, which feed on nectar, so it is a honey plant.

This tropical tree is in bloom throughout the year. In subtropical climates, it blooms from March to September.

The fruits are globose berries, sometimes ovoid, measuring between 4-15cm. long by 4-8cm. in diameter. Calyx persistent at the apex. Fruits are aromatic, bittersweet, and the pulp is viscous.

It is a long-lived tree, that can live between 30 and 50 years, although is no longer productive when older that 15.

* More information about the medicinal properties of guava.

* For the Nutritional Value of Guava (fruit), see.