What is a fruit tree? 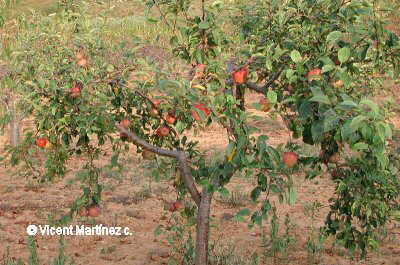 Photo of apple tree loaded with many fruits

Fruit trees are referred to those trees that are capable of producing fruits. The fruit becomes from the matured fertilized ovary inside which we find the seeds.

When we speak about fruits, we refer to any kind of fruit, either a fleshy fruit or a a dry fruit.

Therefore, we believe that a fruit tree is both a pear tree that produces very soft and juicy pears as well as a a walnut tree that gives us walnuts, which are are hard and dry.

We consider fruit trees those type of trees that produce fruits for our consumption. The term does not include the trees capable of producing fruits but which are not grown or produced for Men.

How are trees classified? 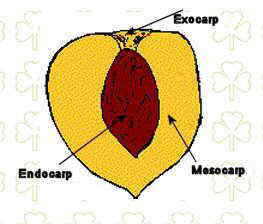 A drawing of the external parts of fleshy fruit (pericarp)

Basically a typical fleshy fruit has a cover that encloses the seeds. This outer layer, called the pericarp, usually consists of an outer layer called the exocarp, which is what is commonly known as “skin.”

This structure can vary from one type of fruit to another, but it generally maintains similar characteristics. For example, in apples, which are fleshy fruits of pome type, the endocarp is not so hard, but it has a leathery structure, that is to say, like leather or parchment. Sometimes, as in the case of oranges, the fruits are hesperidiums and they are different because a fleshy matter appears between the endocarp and the seeds. 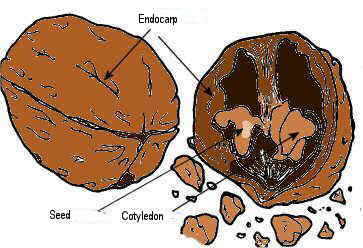 Drawing of the internal parts of a walnut (endocarp, seed and cotyledons)

We can classify the fruit trees in the following groups:

Examples of different types of trees

What is the science that studies fruit trees?

The Pomology is a branch of horticulture that deals with the study and cultivation of plants that produce fruits, especially the trees. The word pomology comes from the Latin Pomun (= “pome”) (which means “fruit”) and “logy” (meaning study).

In the cultivation of fruit trees a number of techniques and considerations should be taken into account.

Some articles explain the steps necessary to plant a fruit tree from the preparation prior to the act of planting. In future articles we will explain all the care and maintenance involved in growing a fruit tree. (Multiplication, pruning, fertilization, plant protection and harvesting)

How to plant a fruit tree?

For a good planting, a fruit tree should follow a series of technical considerations in order a tree to have the ideal growth and maintenance to produce as many fruits as possible with the best quality and nutritional properties.

For more information , go on reading

How to plant a fruit tree