Habitat: Grasslands and pastures of the mountain areas of North West Europe and North America devoid of lime, in acid soils, poor in nitrogen. It is a protected species in many European countries since it has ben declining as a result of the search that has been submitted for its medicinal properties.

On the other hand, it is a plant very sensitive to pollution because it can not live in areas with minimal residual nitrogen even with that one which comes from air deposition. The contamination has led this plant to the danger of extinction in many European mountains. Because of this, it has been protected.

Perennial plant of the daisy family- Compositae- up to 60 cm tall. Solitary, hairy flowering stem arising from a basal rosette composed of oval or oblong leaves, very numerous in number, opposite, sessile, veins prominent. Floral stem leaves opposite, numbering one or two pairs. Flowers yellow or yellowish orange, very showy, solitary at the end of the flowering stems, up to 8 cm in diameter, but usually do not exceed three.

Collecting and conservation: The plant has to be collected immediately after flowering. It must be dried in a shady, airy place and stored in clean well-sealed containers. We must remember that it is a protected plant, so wild samples can not be picked up. 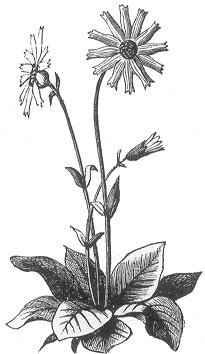 Traditional use of arnica

This plant has been used since ancient times by people from the mountains to relieve pain caused by blows or falls. In the seventeenth century it was very common in traditional medicine for the same purpose.

It was even employed internally to treat certain respiratory diseases, but the contraindications and accidents that occurred with this plant, given its toxicity led doctors to authorize external use only. 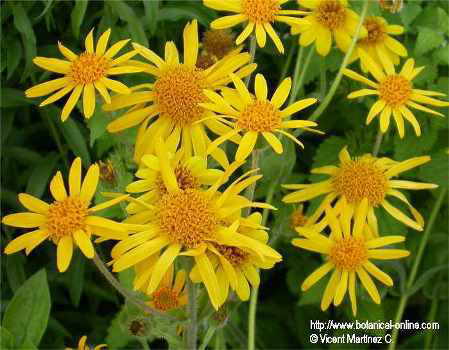 Arnica is a good remedy to relieve pain and prevent infection. It is not known exactly how the plant operates. Some researchers attribute their vulnerary properties to flavonoids (astragalin, quercetine-3–gluco-galacuronide and isoquercitrin)

Others investigators give more importance to its bitter principles: the sesquiterpene lactones (helenalin and dihydrohelenalin) Maybe its content in chlorogenic acid or caffeic acid could influence, since both are well-known vulneraries.

The truth is that those principles have rubefacient properties. That’s to say, when scrubbing arnica preparations on the painful area, they produce increased heat and redness caused by the accumulation of blood. This greater increase in blood makes bruises disappear or they do not even appear, because they are removed by the injection of new blood.

However, this property has its negative effects: In sensitive skins, it can cause injuries or allergic reaction to these components as large reddening, dermatitis, or even water-filled blisters on the skin. For this reason, it is recommended to apply it sparingly to the skin, especially if it is not known beforehand what reaction will occur. It should neither be applied for a long time and in open wounds.

You can use the liquid from the infusion of one teaspoon of dried plant per cup of water. (Apply it on the affected area with a cloth clean) You can dilute a few drops of essential oil in a cup of water (about 20 drops to each cup) or you can apply a thin layer of ointment, placing it on the tip of your fingers and scrubbing it well (Make a couple of daily applications).

External use of arnica

Rubefacient, anti-inflammatory, and analgesic properties of Arnica montana are utilized for the following purposes:

– Blows or Bruises: Its use prevents bruising and hematomas to appear and reduces pain. The analgesic properties of this plant are due to its acid content (gallic, caffeic and chlorogenic) to helenalin and dihydrohelenalin, as well as thymol. These same components besides the luteolin also confer it anti-inflammatory properties. (Spread a thin layer of ointment on the affected part)

– Frostbite: If no open blisters have been produced, arnica ointment os very useful to cure frostbite because this cream provides anti-inflammatory and antibacterial properties and reduces the sensation of pain. (Apply arnica cream on blisters very gently)

– Sprains or strains: Use the same treatment in case of strains or sprains or dislocations

– Muscle pain: It is also is interesting to lessen muscle pain. Suitable for muscular atrophy, tendinitis, bursitis, pain in the neck or backache (Apply the same treatment)

– Bruises on the eyes: Arnica flowers in infusion or arnica tincture well dissolved in water will help eliminate the bruising and the blood accumulation by means of reabsorbing the affected tissues (Infusion of a teaspoon of flowering tops per cup of water. Apply with cloth the resulting liquid on the affected part) (Dilute some arnica tincture in water. Dip a cloth and apply on affected area)

– Striae of pregnancy: It is ideal for treating abdominal marks caused by pregnancy. Apply gently on your stomach four times daily.

– Black or purple nails: Make an infusion of whole plant dry. Dip the purple or black nails to reduce inflammation caused by some hit.

– Black eyes: (Infusion of a flowering tops teaspoon per cup of water. Apply with a cloth with the resulting liquid on the affected part.) (Arnica tincture diluted in water. Dip a cloth and apply on affected area)

– Pyorrhea: (Mouthwashes with the resulting liquid of the infusion of a teaspoon of dry plant by water cup) (Dilute 20 drops of tincture in a glass of water and rinse your mouth)

– Skin diseases: Arnica is one of the plants used for the treatment of skin anomalies. For small wounds, eczema, vaginal irritation, etc arnica promotes healing and helps eliminate the itching or pain (Wash the affected area with water resulting from the infusion of one teaspoon of dried plant per cup of water) (Use tincture diluted in water or arnica cream applied externally)

They are granted by caffeic and chlorogenic acids, helenalin and thymol. These properties, together with previous ones, can be used to cure skin ulcers, provided that they are not open.

Very helpful for eczema and acne. (Wash the affected area with the liquid resulting from the infusion of one teaspoon of dried plant per cup of water.(Use arnica tincture diluted in water. You can buy it in pharmacies of herbalists) Because of these properties, arnica is used in the production of natural shampoos.

This plant can be employed to make mouthwashes in order to heal mouth sores, gum problems, or pyorrhea. Also by means of garglings we can remove bacteria affecting the throat and producing conditions such as pharyngitis or sore throat. (Remember not to drink the liquid) Washing of the genital area can be performed in case of vaginal itching.

Internal use of arnica

In internal use it has been employed for some time to treat respiratory ailments. (A previously widely used treatment for colds was to crush some arnica flowers and take a bit of powder three times a day. Macerations of dried flowers were also exploited to treat fevers after childbirth) Given the toxicity of this plant, it is non recommended any of these internal treatments, limiting its use to external applications.

Internal use should be restricted to professionals. In homeopathy it is used to fight epilepsy and sea sickness or to increase blood flow through the coronary arteries after a person has suffered an angina. It is also being used experimentally to treat lung and colon cancers.

Other uses of arnica

– Mountain tobacco: Arnica is also known as “mountain tobacco”. The reason for this name is because people in the mountains smoked its dried leaves to treat respiratory problems, particularly bronchitis and cough, although this use often irritated their respiratory mucous membranes..

– Homeopathy: Arnica is a plant widely used in homeopathic treatments.

– Pimples, scars and other acne disorders: Clean the affected area with the liquid resulting from the infusion of one teaspoon of dried plant per cup of water. Place a few drops of arnica tincture in a cup of water and clean the area with a cloth.

– Gingivitis: (Mouthwashes with the infusion of one teaspoon of dried plant per cup of water). (Dilute 20 drops of tincture in a glass of water and rinse your mouth)

Contraindications and toxicity of arnica

It must be use only in external treatments. Avoid using it for open wounds or if you are sensitive to their components.

The use of this plant can produce adverse reactions in the gastrointestinal tract that are manifested in vomiting, headache, nervousness, malaise, and diarrhea. Eating high doses of its flowers or tincture can cause death by heart failure, although ingestion of flowers is rather unlikely because of its permanent pungent taste in the mouth. (The ingestion of a half tablespoon of tincture can be a lethal dose for an adult) Arnica preparations can cause abortions in pregnant women

Used externally, it can generate adverse reactions in individuals sensitive to certain ingredients. These can manifest as eczema, dermatitis or destruction of tissues. The same reactions can occur to individuals who have no initial sensitivity when they are subjected to long-term treatment, because of excessive doses. or when treatments are applied to open wounds.

Other species of arnica

– Arnica chamissonis – It comes from the north of Africa and has similar properties. It is easier to cultivate.

– False Arnica / Mexican arnica (Heterotheca inuloides and Heterotheca inuloides var. Rosei) It is a Mexican plant up to five feet tall. It appears as an abundant grass on the edge of roads, uncultivated places and pine forests. Used with similar properties to Arnica montana for both internal and external use. (Mostly for trauma and rheumatism) Unlike European arnica, it has no toxicity and it is widely used in this country. It is widely grown for medicinal properties and sold in markets throughout the year)