What is common daisy (Bellis perennis) ?

The English name comes from “day’s eye” (eye of the day), in reference to its beauty, as daisy flowers open during the day, and close when the sun goes down.

Note: Not to be confused with oxeye daisy (Leucanthemum vulgare). 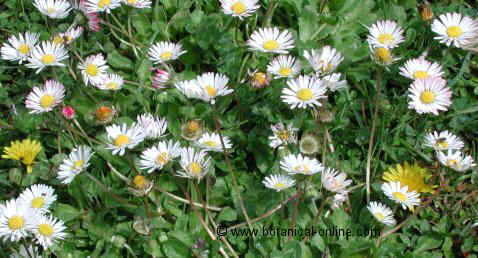 In the image: Daisy flowers in a field ( Bellis perennis)

Etymology: Bellis derives from latin bellus that means “pretty” or ” beautiful flower”. Perennis refers to perennial plant, because it does not lose its leaves in winter.

Origin: Native plant of central and northern Europe. Widespread in Asia Minor and naturalized in North America and New Zealand.

Habitat: where to find daisy flowers?

Daisy is a common perennial plant in the meadows of Europe, forests, streams and road margins. Especially found in pine forests. It resists frost.

Distribution: nearly worldwide, cultivated as an ornamental or wild.

Daisy (Bellis perennis) is a perennial plant, with herbaceous stems belonging to the plant family of Compositae. 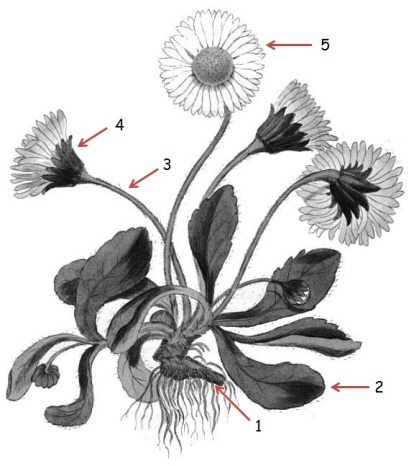 In the picture: botanical illustration of the plant parts of common daisy: (1) rhizome (2) basal leaves, (3) flower stalk; (4) bracts; (5) inflorescence of the plant, where have numerous tiny yellow flowers.

The common daisy grows as a low rosette (basal leaves) about 15 – 20cm high. It has some rhizomatic roots, (1) cylindrical and creeping.

Daisy leaves (2) are oval, spatulate and toothed, bright green, with short petiole. Each leaf has a size between 2 and 5cm. long. All the leaves are in a basal rosette.

The inflorescence (5) of this plant is the typical one of composite plants, a floral head. This type of inflorescence is composed of tens or hundreds of tiny flowers. Daisy floral head is is between 16 to 25 mm. in diameter.

Each floral head stands on a long peduncle or flower stalk, devoid of leaves from 13 to 20cm high, pubescent. Flowers are arranged in a flower head surrounded by bracts.

The plant flowers appear in spring, in May (hence the name Maya), but remains in bloom until late summer.

The daisy flowers have a radiated structure. In the middle of the flower head tubular hermaphrodite yellow flowers are arranged, surrounded by peripheral ray florets that are female.

What is a flower head?

A flower head, very representative in this family, is formed by many flowers gathered together resembling a single flower altogether. The central flowers are surrrounded by ray florets, that are a type of flowers in Compositae plants that resemble the petals of the whole inflorescence, and which are often referred to in the same way.

In a whole, the whole flower head resembles a single flower. When we play “she loves me, she loves me not”, we are removing the ray florets or the female flowers of the periphery of the floral disc or floral head.

Ray florets of a daisy are white, slightly pink, being a very attractive and colorful flower among meadows and fields. It is a honey plant.

What does daisy mean?

Daisy flowers open during the day, and close when the sun goes down or there is bad weather. As a result, this plant is called daisy, which comes from “day’s eye” (eye of the day).

These flowers are pollinated by bees, bumblebees, beetles and hoverflies. * More information: video pollinating a flower.

The fruit is an achene, 1mm wide, Obovate, pale, flat and pubescent. Inside lies the seed. The seeds are spread by wind, rain, wild animals and even humans 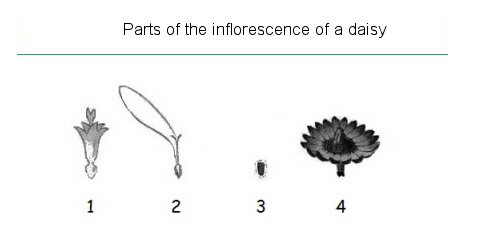 In the picture: parts of the daisy flower. (1) One or tiny tubular flowers that make up the flower head center, with 5 slots, germ and stigma, (2) One of the female ray florets of the peripheral part of the disc, in the form of ‘spoke’, comprising germ, stigma and style; (3) seed, (4) Flower head or floral receptacle formed by bracts, where the flowers are arranged and subsequently the seeds.

Uses of the different parts of a daisy plant

Daisy is considered a weed of lawns.

With the infusion of the leaves we can prepare a mosquito repellent.

The medicinal properties of Daisy were already registered in Gerard’s Herbal, in 1596. In folk medicine, the flowers are macerated in water to prepare a cough remedy. It removes mucus and rheumatism. Externally, daisy preparations help heal wounds, treats bruises and cardinals.

* Learn about its medicinal properties.

Some authors believe that the gender of this species, Bellis, derives from latin bellum, that means war, in reference to its leaves that help heal wounds and bruises.

This beautiful flower caused great anger among the German rulers in the eighteenth century. It was attributed with abortifacient properties, and that is why it was banned and exterminated nationwide. Currently, there is no evidence yet that this plant is actually abortifacient.

In Roman mythology, the origin of common daisy was attributed to voluntary metamorphosis that Belides nymph underwent, to hide from Vertumnus, god of gardens and shepherds, who pursued her.

Christians believe this flower originated from the tears of Mary Magdalene.