Daisy, also called English daisy, common daisy, bruisewort or woundwort (Bellis perennis) is a perennial plant with herbaceous stems belonging to the plant family of Compositae. Daisy is perhaps one of the most popular in this family, since it is a very common weed in prairies.

From a curative point of view, its power lies in its medicinal flowers and leaves, which can be fresh or dried and stored for future medicinal preparations.

Internal use preparations of daisy remedies 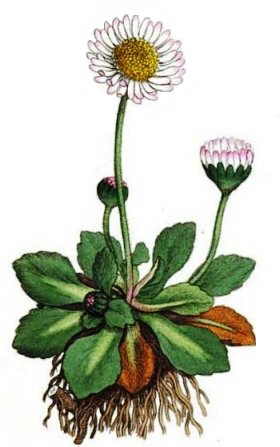 They are preserved in vinegar and are taken as if they were capers, being a remedy for anorexia or loss of appetite.

For its antispasmodic properties, it can help remedy digestive cramps.

Furthermore, it lowers fever and is an expectorant remedy (Apply a compress on the face or take a tea).

External use preparations of daisy remedies

It is used to heal wounds, chewed to treat mouth sores, stop bleeding from a non-serious cut or wound on the skin and against bruising. Also applied as an anti-inflammatory for sprains, injuries, and blows.

You can use its flowers and its leaves, but daisy flowers have more content in medicinal components.