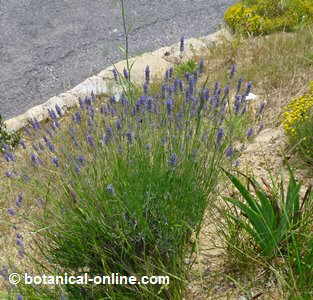 General aspect of lavender. It can be found in dry calcareous places either in the wild or as a decorative plant.

Habitat. Were to find lavanda plants?

Common plant in the Mediterranean basin where it can be found in dry areas of calcareous and sun exposed soils.

Very common with other plants such as rosemary. Sometimes it forms hybrids with Portuguese lavender (Lavandula latifolia) called lavandins. 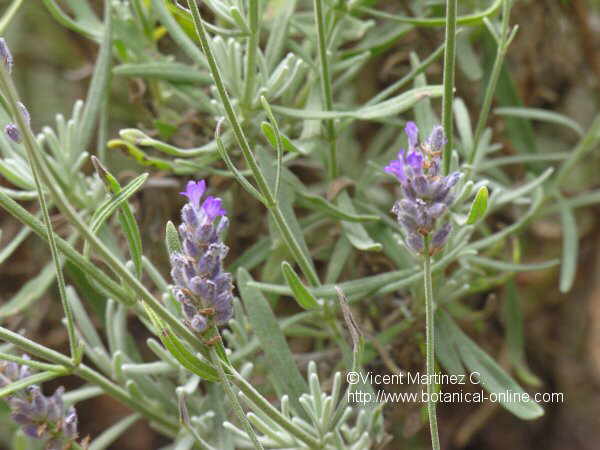 Linear leaves, wider towards the apex or lanceolate, up to 10 cm in length with the edge usually revolute. The young leaves, hairy, smooth and greenish when adult.

Flowers gathered in spikes of violet light at the end of a very elongated flower stems. Spikes from 6 to 10 colored flowers without bracts at the apex, sticky to the touch because of the large amount of essential oil. Purple oval bracts and seven ribs.

Flowers smell like camphor, being a stronger smell than in other lavenders.

This plant is often hybridized with other species of lavender, especially with Lavander angustifolia. This cross produces much stronger samples and with greater qualities for the extraction of essential oil.

Harvest and preservation of lavender flowers

Lavender is harvested at flowering, from mid to late July.

Flowers collected in the morning contain more essential oil and they are more aromatic.

They should be dried in the shade and stored in airtight containers in a dry and dark place.

Traditional use of lavender 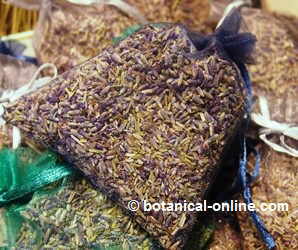 Photograph of a bag of dried lavender flowers. Lavender sachets are used for scenting closed environments, to ward off insects, perfume linen, etc.

Since ancient times, lavender has been used as a relaxing herb in the bathrooms. The Romans spread the use of lavender oil in bath water.

Whether or not this interpretation is valid, the fact is that lavender has been one of the plants most used in Mediterranean countries, influenced both by the fact that it is a wild plant that grows in great abundance in these countries and the fact that it is very easy to grow.

Among the curious folk remedies, we will include the following:

From a medical point of view, its traditional uses have been very broad. As soothing, as an antiseptic, as a sleep aid, as a digestive, as cicatrizant, etc, its properties have been widely recognized.

EXTERNAL USE REMEDIES WITH LAVENDER OIL 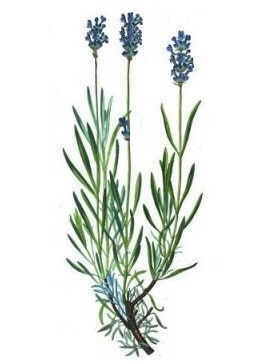 Although lavender has been used, it is is still being used in preparations for internal use, external preparations, especially those made with the essential oil are the most commonly used today.

Lavender oil, rich in esters and alcohols (linalool, borneol, citronellol, geraniol, limonene, alpha-pinene, etc) has anti-inflammatory and sedative properties that make it suitable for the treatment of pain.

How is lavender oil obtained?

Lavender essential oil is extracted by distilling the flowers. This work is carried out industrially and oils can be easily purchased from pharmacies or herbalists.

How to obtain lavender oil at home?

Handmade products can be obtained, such as the extract of lavender oil, by means of:

Lavender oil for the treatment of pain

Lavender preparations for the treatment of pain can be used in situations such as:

Mainly cineol, linalool, geraniol, limonene, and sabinene confer lavender antiseptic properties that make it highly effective in the treatment of outer skin lesions, as a cicatrizant.

At the same time, its richness in tannins provides interesting astringent properties to prevent or cure the skin condition.

This applies to the remediation of the following conditions:

Lavender to remedy the microbial diseases

Its antiviral, antibacterial and bacteriostatic properties have been proved to be effective in vitro resulting in the elimination and inhibition of many bacteria and viruses responsible for respiratory diseases.

In external use, gargles made with the infusion of a spoonful of dried flowers per cup of water have been effective in the treatment of diseases such as:

INTERNAL USE PREPARATIONS WITH LAVENDER

Infusions of lavender to take care of the nerves 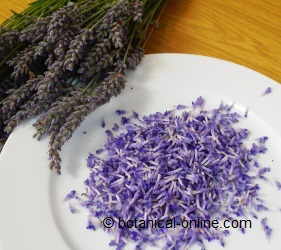 Lavender flowers (Lavandula sp.) are suitable to help calm nerves. They can also be used to flavor recipes such as cakes, biscuits or gelatins.

The antispasmodic and sedative properties of lavender flowers are recognized worldwide. There are countries where lavender infusions or the use of tincture of this plant are prescribed as sedatives and as soft sleeping pills with some frequency.

During the nineteenth century the use of this plant to remedy sleep disorders was something habitual in the homes of aging people in England. Although there are other more recognized natural sedative, calming properties of lavender can be used to reduce nerve problems in circumstances such as:

Similarly, the antiseptic properties of this plant are well suited to inhibit the growth of intestinal bacteria responsible for putrefaction that bloat the stomach and cause pain and intestinal gas. (Infusion for 10 minutes of a teaspoon of dried flowers per cup of water. Take 3 cups a day between meals) (In case of putrefaction and abdominal discomfort, have a cup of this tea immediately after meals) 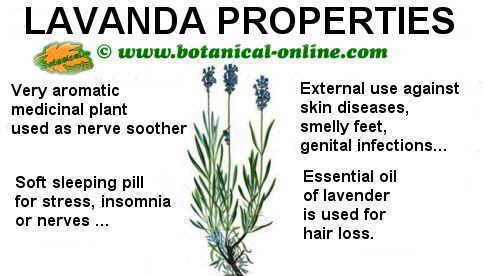 Summary of the main properties of lavander

In internal use, these properties have been effective in the treatment of respiratory diseases such as:

Lavender has some contraindications, toxicity and side efffects that are very important to know before taking it.

The cultivation of lavender