What is Chai tea?

Masala Chai Tea or Chai tea is a hot drink made with a blend of spices and black tea which is prepared by Ayurvedic Medicine in India as a medicinal drink. Its use dates back more than 4,000 years, and stands at the beginning of the tea trade.

Generally black tea is made with Assam tea, Darjeeling or Ceylon tea. 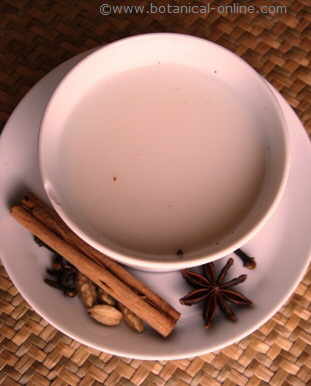 What flavor is Chai Tea?

To describe the taste of Chai tea is a challenge even for trained palates. It’s a loaded infusion of aromas and flavors, combining the fragrance of different spices with the soft texture of the milk, forming certainly a sensory pleasure.

We can notice the spiciness of fresh ginger, refreshing aroma of cardamom, sweetness of cinnamon, fragrance of star anise aniseed and heat of pepper. Black tea adds body to the blend of spices because of its strong fermented flavor.

– Brain tonic: the aromatic compounds and caffeine that the blend of spices and black tea provides stimulate the nervous system and increase wakefulness and concentration. Ideal for taking in the morning, after lunch or mid-afternoon, but not before going to sleep.

– Cardioprotectant and anticarcinogenic: black tea is a source of flavonoids and catechins, powerful antioxidants. If we combine it well with the spices, their antioxidant content is even higher. These substances help protect the cardiovascular system and prevent aging. Some spices like cinnamon also have properties that improve blood circulation.

– Digestive: It is believed that pepper, cinnamon and cardamom were the first digestive plants used by traditional medicine. Modern studies confirm its properties in the digestive process.

– Halitosis: Terpene aromatic substances containing all these spices are natural antiseptics that help fight bad breath. In particular cardamom, is the best known remedy to fight the bacteria that cause bad breath because it is the most important source of cineole, a natural bactericide.

We invite you to try this delicious and healthy tea with so particular taste!!!!

How to prepare Chai tea?

Never let the water boil. Cover and let stand 5-7 minutes. Serve hot with or without milk. This type of tea is never taken cold.

* More information: How to prepare a good tea.