Home › Diet › What to drink during chemotherapy
This article was endorsed by Elisenda Carballido - Dietitian nutritionist. Postgraduate in Phytotherapy and master in Nutrition and Metabolism.

Suitable and unsuitable drinks for chemotherapy

WHAT TO DRINK DURING CHEMO?

How much liquid should a person under chemoterapy drink? 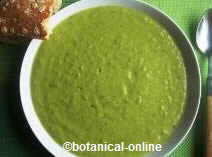 Food must be prepared to be easily digested

40ml liquid are recommended for each kilogram of real and actual weight of a patient per day. This leads to a simple calculation, that is, when a person weighs 50 kg, she/he should ingest 2000ml (2 liters) per day of liquid.

Such fluid intake during chemotherapy treatment can be difficult for some reasons such as poor appetite, early satiety, metallic taste of water and other food problems (side effects of treatment).

To avoid this problem, we must expand as much as possible the range of possibilities of liquid intake. That is, not only to ingest liquid through water consumption, but also, we can ingest it by some other foods or preparations that can be tolerated better:

Some proposals to increase fluid intake during chemotherapy

Some plant infusions can provide liquids during chemotherapy

These guidelines should be implemented from the three days before the start of chemotherapy until it finishes and symptoms of digestive discomfort have been resolved:

More information on cancer and food.

– Minerals and vitamins for chemotherapy

– A menu for chemotherapy

– Diet during and after chemotherapy

– How to overcome vomiting from chemotherapy