Sprouts are the foods derived from germinating the seeds. Seeds contain an embryo, which is the small plant in an embryonary state, surrounded by albumen, which is the food reserve contained in the seed. In its natural state, when conditions are favorable (sufficient moisture, heat and oxygen), the embryo develops resulting in a new plant.

The germination occurs when enzymes are activated growth remained inactive. The activation of these components are produced by supplying moisture, heat or, on occasion, indirect sunlight.

Forced germination of seeds is a seed treatment which provides similar conditions to those found in nature to germinate when we want. 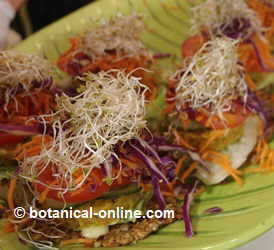 Alfalfa sprouts in a recipe

What foods can germinate?

All seeds can be subjected to a process of germination. Of course, from a dietary standpoint, plants that are toxic should not be germinated . Some edible foods such as potatoes or tomatoes, produce toxic sprouts.

Sometimes, sprouts can be cooked to remove the toxicity. Other times they remain toxic even if cooked. Other times, the sprouts may contain ingredients that ingested in high amounts can be harmful. For instance, sprouts of buckwheat, eaten in large quantities can cause phototoxicity phenomena, that’s to say, they react with sunlight and cause skin problems. This is especially true when taking its juice.

Therefore, before eating this type of food, you have to be very sure whether they are or are not edible. You should also note what quantities can be eaten. To do this, it would be wiser to consult a dietitian.

Among the seeds or foods that can be eaten germinated, we have:

Of all the previous seeds the most used are:

–The so-called China bean, green gram or mung bean sprouts (Vigna radiata), A papilionaceous plant that produces rounded green seeds. It is grown especially in warm regions of China, Indonesia and southern United States as forage. Its seeds are the basis for most of the sprouts that are used in Chinese cooking. This food is often part of the cooking of vegetables from India or kitchen Dal.

– Alfalfa sprouts: This legume, used mainly for livestock feed, which grows wild in many vacant lots or along roadsides, produces vegetable seed about 4-7 mm in diameter, without spines, spiral that can be germinated to produce sprouts of great quality.

– Barley sprouts: Barley is a cereal used primarily as animal feed. Barley sprouts can be found in supermarkets or grocery stores.

– Soybean sprouts : Very used in China cuisine, they have become very common in many parts of the world. It is usually served to accompany the salads. 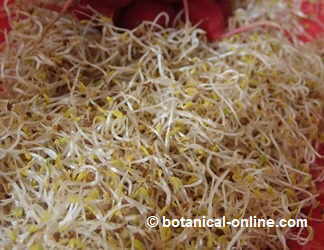 The germination process involves a series of chemical changes within the components of the seeds from which they derive. Sprouting gives some foods richer properties and makes them much better to digest. Between the main changes we have the following:

– “Predigestion” of proteins: Proteins, by the action of the enzyme diastase, turn into amino acids which are easier to digest. Some foods that can cause flatulence or intestinal problems, as legumes, are more easily digested when they have been germinated. We have seen that fermented foods contribute to repair the intestinal flora. However, cereals that contain gluten and are toxic to celiac disease (wheat, oats, barley and rye) should not be eaten by these patients, even if they are germinated.

– Increase of enzymes: The germination process triggers the development of enzymes. It is believed that fermented foods contain up to 100 times more enzymes that cereals, fruits or vegetables without germinating.

Enzymes are necessary for digestion of proteins, fats and carbohydrates. When we eat sprouts, and especially in the early days of germination, enzymes act as catalysts for various bodily functions (neutralized toxins, cleansing and cell regeneration, increased energy, etc)

With all that the body gains in health and this is manifested internally and externally. Maybe this is the reason why, when we eat sprouts, it seems that our body rejuvenates.

– Conversion of starch: Starch is converted into glucose which promotes digestion. This process involves acting digestive enzymes making much more digestible all those foods that in their natural state were indigestible. The sprouting process allows to eat cereals or legumes to those people who have problems of assimilation when they eat these foods without germinating.

– Benefits of eating them raw: The sprouts should be eaten raw as proteins and starches have become digestible products that do not need to be cooked. This allows eating a series of seeds raw, which was impossible before germination. By avoiding having to cook these foods, certain vitamins and enzymes are not destroyed.

– Germinated food is guaranteed not to be contaminated: Contamination hinders the germination process. Having foods that germinate well is a guarantee that they have not been subjected to too many pollutants. This is especially true when we germinate in our own home, choosing those more reliable seeds, especially if they come from organic farming.

Other advantages are not so clear

– Increase of vitamins? It is said that fermented foods contain many more vitamins than before germinating. Studies by Chavan and Kadam in 1989 seem to confirm this. Most nutritionists seem to adhere to these results. However, they could be questioned compared with nutritional data provided by the USDA – Department of Agriculture of the United States. In the composition tables that this Department provides it is clear that fermented foods contain much more vitamin C, because of the growth of green shoots. The remaining vitamins significantly decreases as it can be seen in the table below.

Despite its high content in vitamin C, even in this aspect the numbers have been exaggerated. Some people have dared to compare the content of vitamin C in Mungo beans (11.4 mg / 100g) with oranges (53 mg / 100g)

It is said that alfalfa sprouts have more Vitamin A content than tomato itself, when the content of fresh ripe tomato is 623 IU, while that of alfalfa sprouts, is 155 IU, according to the USDA. It is alleged that wheat increased to three times its vitamin E once germinated, when, according to data from the same agency, whole wheat has 1.440 mg and germinated wheat has 0.050 mg. Therefore, either the details of this agency were incorrect or vitamin values of sprouts have been overstated.

Considering that cooked foods contain less vitamins than the germinated ones is not completely true. This depends on the type of food and the type of vitamin. Vitamin C is superior in germinated food since the cooking process destroys this vitamin partly. Wheat bread contains more vitamins, except for pyridoxine, than the germinated wheat. In the case of the lentils a substantial increase of the majority of vitamins takes place except for folic acid. In the case of the soybean, some vitamins increase and others decrease. It is curious to see how the vitamin E decreases dramatically or disappears completely in these three foods when they germinate.

The following table shows a comparison between the composition of the raw soybean and that of the sprouts. It is clearly seen that the percentage of thiamin, riboflavin, pyridoxine and folacin, decreases in soybean sprouts.

– Increase of minerals? It is said that fermented foods generally contain more minerals than the same foods before germinating. As shown in the three foods in the table below, the sprouting process increases the sodium content. The rest of minerals decreased significantly when compared the food when raw.

If we compare the cooked food with the sprouts, we will find that in the case of wheat, bread wheat surpasses in minerals to germinated wheat. The same applies to lentils except with calcium and manganese. In case of soybeans, except for a small increase of copper and zinc, mineral contents decrease when germinated. It is curious to see how fermented foods contain more sodium than the same foods cooked without salt or germinated.

In the table above we can also see that the majority of minerals in soybean decreases when germinating.

The same trend seems to be proved in other studies available in the network, as the following one about sprouted seed of Hibiscus.

Comparison between some foods when raw, cooked or sprouted

The table below shows the composition of three food that can be eaten sprouted. Here are the differences in composition when eaten without germinating and when they are eaten after the sprouting process.

This includes the composition of the three raw food. The data has been taken from the USDA – Department of Agriculture of the United States.

More information on other food supplements.

Composition of wheat, lentils and soy, sprouted, per 100 gr.

More information on other food supplements.

*Related information: Cultivation of wheat, How to make bread at home