Black tea is a stimulating drink that is obtained from the leaves of the tea plant (Camellia sinensis).

It is distinguished from other types of tea because it has undergone a process of oxidation and fermentation, which gives a very dark color to the leaves.

These processes determine the special qualities of black tea. 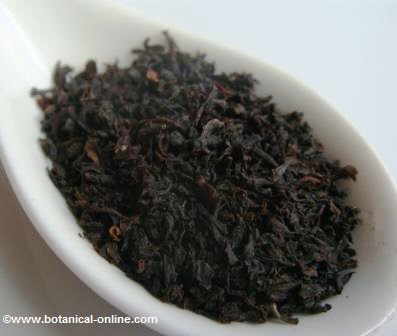 The process that tea is subject to for obtaining black tea has several phases:

– Withering: partially dehydration of the tea leaves, that’s to say, water is extracted to make it pliable.

– Rolling: The leaves are rolled on themselves and acquire the look you see when dry. At this stage, cell membranes get broken and release enzymes leading to reactions which provide the aromas, flavors and tea physical changes.

– Screening: The leaves pass through a screening process where particles are separated according to the different sizes, so that oxidation is homogeneous.

– Fermentation or pseudo-fermentation: It is a step unique in black tea. The leaves are left for 2 hours in a room with temperature, ventilation and humidity controlled to oxidize and ferment. Theine (= caffeine) is released and polyphenols are oxidized into theaflavins and thearubigins, that will give astringency and a reddish color to the infusion.

Recently, the term fermentation is wanted to be changed by the term aeration because it is considered to be more correct. This change of terms is also because, in Muslim countries, it is believed that black tea might contain alcohol since it is a ” fermented “, plant, something which is not true.

– Drying: Leaves are almost completely dehydrated ; the oxidative action of enzymes freezes completely (for fermentation); the majority of essential oils are lost (volatilized by heat); tea acidity increases and a much darker coloring occurs to the leaves.

Black tea contains other different substances than those of non-fermented teas. These substances are formed from the degradation of the polyphenols of the leaves during the process of fermentation:

– Theaflavins: These are substances that provide the characteristic strong astringent taste of black tea. They are derived from the oxidation of polyphenols, being responsible for the red or orange tinge of the black tea infusion.

– Thearubigins: Another type of substances formed by the degradation of tea polyphenols during fermentation. With similar properties to those of theaflavins.

– Caffeine: Caffeine (= theine) in black tea has the same stimulating effects on the nervous system than caffeine in coffee . Black tea is rich in caffeine because it is released during fermentation. Moderate levels of caffeine are characteristic of a quality black tea, while low or very high levels correspond to old leaves or to an excessive processing.

– Proanthocyanidins: During the oxidation or fermentation process of black tea proanthocyanidins compounds are formed, consisting of condensed tannins formed by anthocyanins. They have protective functions for blood vessels and especially for the eye health.

– Stimulating: Black tea is the kind of tea that contains more caffeine (=theine). However, its content is still much lower than that of coffee: A cup of black tea provides half as much caffeine as coffee, so its stimulant effects are much smaller.

Besides, it is rich in tannins that help regulate the absorption of caffeine. The caffeine content can vary depending on the type of black tea.

– Cardiovascular System: Scientific studies have shown that black tea has properties to reduce cholesterol in the blood, helping to prevent poor circulation. In these cases, it is preferable to prepare tea without sugar (you can use stevia or sweeteners).

These effects are even more significant in green tea, as its antioxidant content is higher. People with heart disease or high blood pressure should avoid to drink tea or coffee. They can choose other decaffeinated teas such as Rooibos teas or softer teas like white tea.

– Hypotension: black tea increases blood pressure due to its caffeine content, although their effects are not as powerful as those coffee can produce. The difference is that green tea is not as exciting (contains half the caffeine than coffee), and also because tannins exert regulatory effect on the absorption of caffeine. For this reason, people with hypotension or those who get dizzy when standing up (orthostatic hypotension), black tea can be used as a remedy.

– Antioxidant: Antioxidants are mainly black tea polyphenols such as theaflavins and thearubigins, which occur naturally in the leaves during the fermentation process. These antioxidant compounds are responsible for tea’s effects to protect cells from oxidation. Drinking tea has been identified as a protective factor against cataracts, and in people with smoking habits. Black tea protects them from oxidation caused by cigarette smoke. The antioxidant effects are greater when we consume green tea, as it provides epicatechin – gallate, which is considered one of the most powerful antioxidants.

– Diabetes: Black tea is one of the richest teas in proanthocyanidins, compounds that protect blood vessels, especially those in the retina of the eye. These substances have also demonstrated hypoglycemic effects that help regulate blood sugar for people with diabetes.

– Parkinson ‘s Disease?: Studies show that populations consuming caffeinated beverages have a lower incidence of Parkinson’s. However, some experts believe that there is no relationship between these two components.

– Astringent: Black tea has strong astringent effect due to theaflavins, so it is useful to treat diarrhea.

Among the most popular teas we have:

– Ceylon tea: black tea produced in the island of Sri Lanka (formerly Ceylon). The plant grows in a privileged region: temperate, humid and at altitudes of 600 to 2,300. The most reputable provinces where the tea is grown are: Ella, Haputale, Nuwara Eliya and Rahuma. They have different qualities of tea.

– Darjeeling tea: black tea grown in Darjeeling, a region of Bengal (India) on the Himalayas. The tea plant grows to 2,100. altitude and climate make it ideal for a piece of quality and taste. Take with milk or lemon.

– English Breakfast: Blend of black teas that is taken with milk at breakfast. It has a strong flavor and a moderate caffeine content, designed to ” start the day”.

– Earl Grey: Blend of black teas with bergamot flowers or. Very aromatic and one of the most popular among the different blends (mixtures) of teas.