Menopause is a stage in a woman’s life characterized by the definitive natural loss of menstruation. We must avoid the current tendency to medicalize menopause as if it were a disease: it is not pathological, nor is it harmful to health, and it is not necessary to take medicines or preventive remedies.

The conventional treatment of menopause is symptomatic, and consists of pharmacologically treating those alterations related to menopause, or that appear with one’s own age, such as depression, hot flushes, memory loss, or overweight.

The role of phytotherapy in the treatment of the menopause will focus in using those plants which objective will be:

In general, they are plants that avoid or diminish the negative symptoms that the period of the menopause entails.

Many medicinal plants have traditionally been used as home remedies for some problems related to menopause or with one’s own age, such as dry skin, hot flashes, irritability or restlessness.

Among all the plants used, we could mention the following as the most recommended for the natural treatment of menopause:

Herbs for the natural treatment of menopause 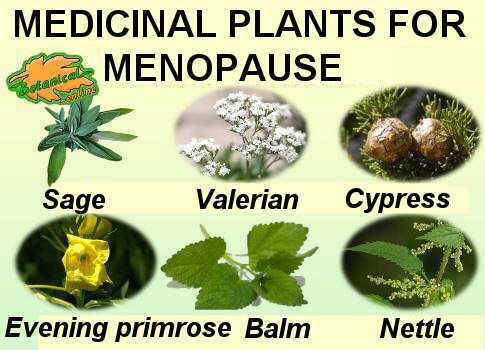 Main medicinal plants used in the natural treatment of menopause

Plants to stop bleeding in menopause

Infusion of a couple of tablespoons of dried plant per half liter of water. Drink a couple of small cups a day) (Maceration of the desired amount of dry plant with the same amount of alcohol for a week. Filter and take about 25 drops per day)

Plants with phytoestrogens for menopause

Phytoestrogen supplements are sold without a prescription as food supplements, but it is recommended to consult a doctor before taking them.

The infusions of plants with phytoestrogens have a content of isoflavones much lower than that of soy.

It also appears to influence the process of decalcification and heart problems that accompany menopause, as has been demonstrated in studies on the use of extracts of this plant. (Infusion of a teaspoon of dried leaves per cup of water. A couple of cups a day.)

Among them, we can mention:

For this reason, although nettle is not a miracle or an elixir for baldness, it can help prevent or delay its onset. (100 gr maceration. Nettle and dried rosemary in 1 liter of anise for 15 days. Rub on the scalp in the morning and before bedtime) (More information on hair loss)

(Make a mask with avocado pulp and keep it before going to sleep for half an hour on the face). Avocado, due to its vegetal fat content, is ideal for the treatment of normal skins, or dry ones, but it should not be applied on greasy skins. (More information on the care of dry skin)

Essential oil from plants for menopause

The use of essential oil for massages before sex helps to relieve tension, reduce stress, allowing greater communication between the partners and increases their sexual desire.

Among others, we can use the following plants: rose, dog rose, mint, ilang-ilang, jasmine, sandalwood, orange blossom, lavender or clary sage. (More information on plants to increase sexual desire)

– Remedies for bad circulation during menopause

– Importance of eating soy during menopause

How to improve menopause

Remedies to improve circulation during menopause